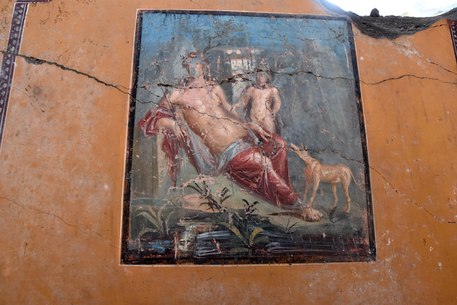 (ANSA) - Rome, February 14 - A stunning fresco depicting Narcissus gazing at his own reflection has been uncovered during new excavations at Pompeii, the interim director of the archaeological site, Alfonsina Russo, announced on Thursday.
Pompeii Superintendent Massimo Osanna said the myth of Narcissus was a "very commonly found artistic topos in the ancient city".
He said "the whole ambience is pervaded by the theme of 'joie de vivre', beauty and vanity, underscored also by the figures of maenads and satyrs who, in a sort of Dionysian courtship dance, accompanied the visitors inside the public part of the ancient house.
"It is a deliberately luxurious, and probably dating back to the last years of the colony, as is testified by the extraordinary state of conservation of the colours".
The discovery was made during a dig at the Regio V section of the ancient Roman city and comes just months after the unearthing of another specular fresco, depicting Jupiter taking the form of a swan to impregnate Spartan queen Leda. "The beauty of these rooms have led us to change our project and continue the excavation," Russo said. "In the future it will be possible to open up at least a part of this domus for the public to enjoy". "Refined decorations of the fourth style characterise the entire Room of Leda," the archaeologists who made the discovery told reporters.
"Delicate floral ornamental elements, interspersed with griffins and cornucopia, flying cherubs, still lifes and scenes of animals fighting abound", they said.
The "harmony of these precious designs extended up to the ceiling, which collapsed in ruins under the wight of the volcanic stones called lapilli, but the fragments have been recovered by restorers who will put them back together," they said.
"Also very interesting, in the atrium of Narcissus, is the still visible trace of a staircase that led to the floor above, but above all the discovery in the space of a the stairwell, which was used as a store room, of a dozen glass containers, eight amphorae and a bronze funnel," the archaeologists told reporters. "Then, there is a bronze 'situla' (container for liquids) which was discovered next to the impluvium".
Narcissus, in Greek mythology, was the son of a river god and a nymph who was distinguished for his striking beauty. According to Ovid's Metamorphoses, Book III, Narcissus's mother was told by the blind seer Tiresias that he would have a long life, provided he never recognized himself. However, his rejection of the love of the nymph Echo drew upon him the vengeance of the gods. He fell in love with his own reflection in the waters of a spring and pined away, or killed himself; the flower that bears his name sprang up where he died.