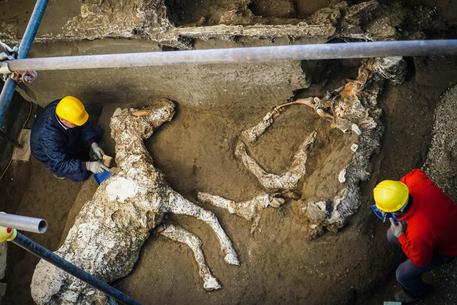 (ANSA) - Rome, December 24 - The skeleton of a horse that probably belonged to a high-ranking Roman military official has been found at Pompeii.
"It's a very rare find," said Pompeii digs director Massimo Osanna.
The horse was apparently decked out to ride on an official mission, perhaps to help citizens fleeing the 79 AD eruption of Vesuvius that buried the city, he said.
"It was unearthed with an impressive saddle, and very fine bronze accoutrements," said Osanna.
The find was made in new digs at a villa on the southern outskirts of the ancient Roman city.
"Now we will go on to discover the villa," Osanna said.
The beautiful animal had just been mounted with a "modern" wooden and bronze saddle and its head had been decorated with a shiny harness.
Osanna said it had been suffocated in a red-hot pyroclastic cloud along with its owner, the commander.
Its head was found bowed and its legs pulled up into its body in its death spasms.
"It's a very important find because its is particularly rare," he said.
Its villa has been dubbed The Estate of the Decorated Steed, Osanna said.
Lying outside Pompeii to the south, next to the via di Civita Giuliana, "it was a residence of the utmost prestige, with richly frescoed and furnished rooms, sumptuous terraces sloping down to give onto the gulfs of Naples and Capri, as well as an efficient service quarter, with the kitchen garden, warehouses for oil and wine, and ample lands which had been thickly cultivated," said Osanna.
Remains of the villa were initially found at the start of the 20th century, Osanna said.
They were discovered by Marquis Onofrio Inperiali, the owner of the land, who however later ordered his men to re-inter the finds.
He also found a treasure trove of ornaments and decorations, some of which were sold to museums but some of which have been sadly lost in an Allied bombing raid that hit the Antiquarium in 1943, Osanna said.
The villa has been likened in its magnificence to the celebrated Villa of the Mysteries, one of Pompeii's prime attractions.
Other, partial digs in the 1950s uncovered a very long sand imposing portico with splendid frescoes in the third Pompeian style, Osanna said.