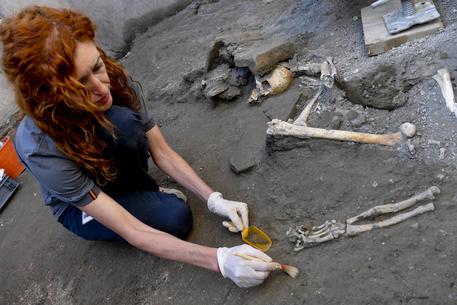 (ANSA) - Rome, October 24 - The remains of five people, probably two women and three children, were found in a bedroom in Pompeii on Wednesday.
The group probably took refuge in the bedroom in a desperate attempt to escape a shower of volcanic rocks that had filled the house, Pompeii director Massimo Osanna told ANSA.
"It's a shocking discovery, but also very important for the history of studies," Osanna said.
The skeletons were found in a house where a charcoal inscription was recently found backing the theory that the Mount Vesuvius eruption that destroyed the ancient Roman city took place in October of 79 AD, not August.
New excavations have taken place at the site, in the Regio V of Pompeii.