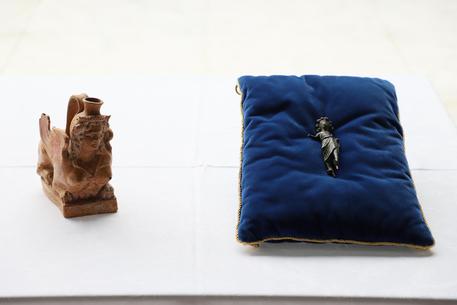 (ANSA) - Rome, October 11 - Britain on Thursday returned two small but extremely valuable stolen Etruscan treasures that were saved from being sold at auction in London earlier this year.
The IV century BC winged sphinx terracotta oil or perfume server and a statuette of Lares stolen from a Siena museum in 1988 were recovered by the MET with the help of Italy's art cops and the British Cultural Property Protection Unit. "If they had been sold they would have got several thousand pounds," said Carabinieri General Fabrizio Parrulli.
No guilty party has yet been identified, although notorious art trafficker Giacomo Medici, convicted in 2004 of dealing in tomb raiders' loot, has been linked to the terracotta figurine.