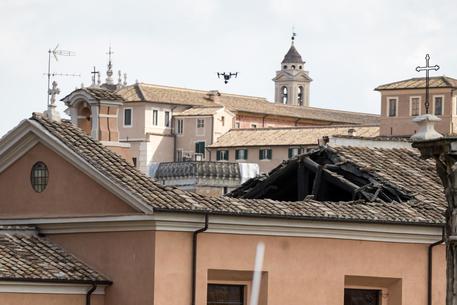 (ANSA) - Rome, August 31 - Rome prosecutors opened a probe into culpable disaster Friday after Thursday's collapse of the roof of a church in the Roman forum.
The area under the collapse was cordoned off after the art works and other objects were taken to safety, sources said.
Among other things, prosecutors want to establish whether there were failures in the maintenance of the 16th century building.
Rome's archaeological superintendency, meanwhile, started assessing reports of work carried out on the church over the last few decades.
The experts are looking at all maintenance and other work performed on the San Giuseppe dei Falegnami (St Joseph of the Carpenters) church above the famed and infamous ancient Roman Mamertine Prison.
Some work on the roof was carried out in 2014, sources said.
At the same time, sources said, superintendency technicians are working to recover moveable works inside the building with the help of fire services.
It was still unclear whether the Mamertine Prison had suffered some slight damage or not.
The head of Rome's fire service, Marco Ghimenti, said "we can't say the structure is 100% safe.
"It needs attention" Ghimenti said the prison "does not present significant damage" "It is the structure that is immediately below this collapse," he said.
"There was a major dynamic impact on a structure that was not meant to suffer one".
Ghimenti said "there is a heavy weight at the moment and we have to make sure the it doesn't become even heavier with the addition of rainwater".
Culture ministry architect and restorer Francesco Scoppola said "the collapse was probably caused by woodworm or termites in one of the trusses".
"It is almost certain that a wooden structure on the church roof was eaten away," he said.
Culture Minister Alberto Bonisoli said Friday such episodes must not happen again.
"Thank God there weren't any victims in Rome..but what happened must not happen again," he said.
"The problem is more general," he said.
"In the next few weeks we'll put together the information we have with an assessment of danger with regard to determined parameters, no matter who the owner is".
The church roof collapse Thursday spurred reports that the ancient gaol had been damaged too - reports that proved to be incorrect.
The roof collapse has not caused any damage to the prison, Rome Special Superintendent Francesco Prosperetti said.
Between the Church of San Giuseppe dei Falegnami and the former jail, he explained, there is the intervening Chapel of the Crucifix.
It was the latter that had been damaged, he said.
But he said the damage was "negligible".
There were weddings slated in the church this weekend, church sources said.
They would have been the first since the August break, they said.
"We have already alerted the couples," said Rome auxiliary bishop Mons. Daniele Libanori, who lives right next to the church.
He said the weddings of the mostly Roman couples would now take place in St Mark's Church near Piazza Venezia.
Earlier reports said the most famed and infamous prison of ancient Rome had been hit by falling roof fragments.
No one was hurt because the church was, as usual, closed at the time of the accident. The vault of San Giuseppe dei Falegnami (St Joseph of the Carpenters), at the Roman forum, caved in. The church is usually closed and only opened for weddings.
It was built between the end of the 16th century and the start of the 17th.
A fire-service crane has got rid of some remaining hanging parts of the caved-in roof. The wooden beams, which are still standing, are visible through the wreckage.
The inside of the church is full of broken beams and rubble, fire services said.
Sniffer dogs are going through the wreckage as a precaution, sources said.
The church's priest, who was in the building but not the church, is OK.
The collapse did not damage the once-infamous Mamertine Prison, Prosperetti said.
This contradicted an earlier report from a fire-service official.
"Some fragments of the roof," fire service engineer Luigi Liolli said, "hit a part of the altar.
"A beam then damaged the Mamertine Prison too", where the pavement gave way, he said.
Colosseum Archeological Park Superintendent Alfonsina Russo told ANSA the church was the property of the Vatican's Vicariate of Rome.
The Mamertine Prison was used to house Rome's defeated enemies, many of whom were executed there.
Among those held there were Vercingetorix, leader of the Gauls during the Gallic War, who was executed at Caesar's Triumph in 46 BC; Jugurtha, King of Numidia, who died of starvation there in 104 BC; St Paul; and St. Peter, who was imprisoned there before being crucified, after performing baptisms in a spring at the bottom of the pit.