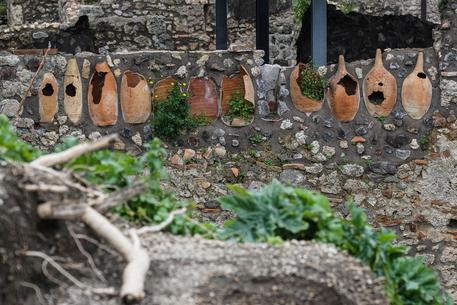 (ANSA) - Naples, March 23 - Major new finds have been unveiled for Friday's 270th anniversary of the discovery of the first remains of the ancient city of Pompeii buried by ash and rock following the eruption of Vesuvius in 79 AD.
The local archaeological authorities have marked the occasion by presenting major new excavations in the Regio V area launched under the auspices of the ongoing conservation project Great Pompeii. "Our aim was to resolve the instability of the excavation fronts in this area, which had a history of collapses," said special superintendent for Pompeii Massimo Osanna. "The work involved the reshaping of this part of the archaeological site. Then when we started digging we found remains of public and private areas, gardens and porticoes that we did not think we would find. It is the most important dig in the post-war period," he continued.
"And, for the first time as academics, we have come across objects, plasterwork and frescoes that have never been restored, that are in their original shape and colour without having been tampered with in past restoration. Now we also have the opportunity to carry out conservation work using the most advanced techniques, materials and experiences," Osanna added. The work is expected to take two years at a total cost of 8.5 million euros and the area will remain open to visitors for the duration.
Archaeologists have already identified an open area that they believe was a garden whose function will be better investigated through palaeobotanical analysis. The south-eastern corner of the 'garden' has already revealed several amphorae, whose type and contents are now being studied.
Nearby the street that ran alongside the House of the Silver Wedding is coming to light with its raised pavements and the entrances to the buildings along it. These include the entrance to a domus with frescoed walls and panels against a red background with the painted image of a pair of dolphin at the centre. Meanwhile, the director-general of the Great Pompeii Project, Mauro Cipolletta, confirmed plans to bring high-speed railway services directly to the site. "The project hasn't been shelved but it needs to be studied in depth, together with the elimination of the coastal railway line that currently separates to area from the sea," Cipolletta said.