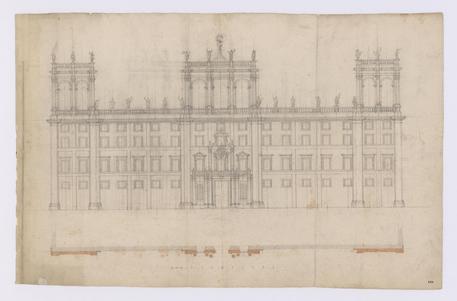 (ANSA) - Rome, December 4 - Francesco Borromini (1599-1667), the protagonist of Roman Baroque architecture who still exercises a deep influence on contemporary architects, is at the center of a series of initiatives this month to commemorate the 350th anniversary of his death.
An international congress and an exhibit showcasing his drawings and projects will kick off on December 11.
Other initiatives aimed at highlighting the different aspects of Borromini's architecture and its impact on the Eternal City will include guided tours and lessons in the churches and buildings, a photography competition and a mass at Sant'Ivo alla Sapienza.
The events have been organized thanks to the cooperation between institutions including the Vatican Museums, the Accademia San Luca, the architecture department of La Sapienza University, the MAXXI Museum of Arts of the 21st century and the Academy of Fine Arts in Rome.
Presenting the upcoming events, Vatican Museums Director Barbara Jatta said Borromini is a "key figure of 17th-century architecture, able to inspire throughout the centuries generations of architects".
Leading Borromini expert, architect Paolo Portoghesi spoke about the genius' fortunes and misfortunes, including his death by suicide on August 3, 1667, after almost a day of agony.
The architect, Portoghesi said, often felt that his work was not understood and mischaracterized, starting with Pope Alexander VII who considered him a "Gothic architect" and favored his archrival Gian Lorenzo Bernini.
Borromini, who was born in Canton Ticino and was one of the most important architects in Rome for four decades, working alongside Carlo Maderno and Bernini, ultimately decided to take his life because he could not bear the prospect of not working anymore.
Portoghesi noted how only in the 18th century Borromini was once again appreciated.
The rise of Neoclassicism again cast a shade on his work as he was accused of "being the great corruptor of classicism with his capricious inventions", said Portoghesi.
However, at the end of the 19th century Borromini's architecture once again inspired new projects.
In particular, the restlessness infused in each project by Borromini was key for leading contemporary architects such as Frank O. Gery and Zaha Hadid, according to Portoghesi.
The international congress 'Francesco Borromini 1599-1667' will be held on December 11 at the Accademia San Luca, on the 12th at the Vatican Museums and on the 13th at the La Sapienza University.
The show 'Francesco Borromini. I disegni della Biblioteca Vaticana' (Francesco Borromini. The drawings of the Vatican library) will be inaugurated on December 12 at the Vatican Museums.