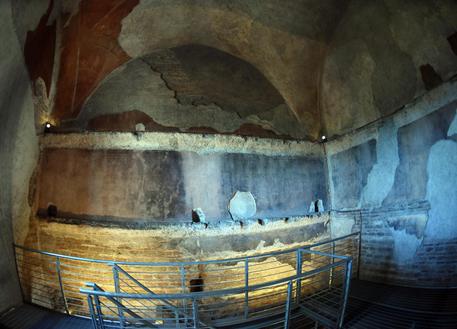 (ANSA) - Rome, October 26 - The Barberini tomb, also known as the Corneli tomb, is set to open to the public for the first time ever in November, following a major restoration.
The tomb is situated at the start of the archaeological park on Via Latina, one of the oldest of the ancient Roman roads, which in that area has been transformed into a neighbourhood park.
Visitors must make a reservation to be accompanied by a guide on a tour of the brick building with multicolour decorations on the facade - whose traces of bright hues of yellow, red, violet and gold have re-emerged - as well as interior frescoes dating to the 2nd century A.D..
The tomb is the only one along the road (which also includes the Valeri tomb and the Pancrazi tomb) that is still standing and in its original form.
"The monument is well-preserved, because through the centuries it was always used as a shelter for agriculture and sheep-farming purposes, up through the 1800s," said Francesca Montella, the archaeologist who directed the restoration, which was carried out with a 250,000-euro investment.
The tomb is named after the Barberini family, who were the last owners of the land in that area of the park.
The restoration will be fully complete early next year and become part of the Appia Antica Archaeological Park sites, said the park's director, Rita Paris.
She said additional work is under consideration, including the start of a major restoration operation on the basilica of Santo Stefano, the only Christian church in that area.
The Corneli tomb restoration took two years, during which the building was secured and made accessible by rebuilding the ground floor (which had collapsed over time), as well as the stairs to the upper floor, and installing a lighting system.
The floors were rebuilt using metal grids, allowing for a true appreciation of the monument's considerable interior size.
The isolated tomb has always towered over the Roman countryside.
In the 1700s the Barberini family removed a splendid sarcophagus from it, which contains scenes inspired by the myth of Protesilaus and Laodamia and is now housed in the Vatican Museums.
The restoration project investment also covers the preparation of the hypogeum underground level that hosted the funeral chamber, where the walls and ceilings have already been secured and where work is now underway to restore part of the mosaic floor.