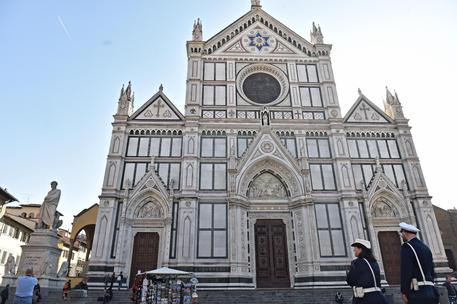 (ANSA) - Florence, October 20 - Three heads of the Opera di Santa Croce conservation agency were informed Friday they are under investigation in Thursday's death of a Spanish tourist hit by a falling stone in the Florentine basilica. Opera President Irene Sanesi, Secretary-General Giuseppe De Micheli and technical chief Marco Pancani are being probed for culpable homicide, judicial sources said. Prosecutors said it was a "due act" in view of the autopsy. The 52-year-old Spanish tourist was killed Thursday after being struck by an "architectural element" that fell off the top of a transept in the famed basilica.
A fairly large piece of a capital came crashing down from 20 metres up and hit the man, Daniel Testor Schnell from Barcelona, on the head.
Medical teams rushed to the spot but were unable to revive Schnell, who was visiting the church with his wife.
The piece of stone, a "peduccio" bolstering the base of wooden structures, fell off the right-hand transept of the basilica, a superintendency expert said.
The expert said there were no other known "critical elements" in the church, which was "subject to periodic checks".
Florence prosecutors opened a culpable homicide probe in the case.
Culture Minister Dario Franceschini said the criminal probe would find out how and why the stone fell off. "There will be an investigation by magistrates to understand how this dramatic fact happened and whether there are responsibilities over maintenance," he said. He added that he had immediately contacted his ministry to establish the "chain of competence".
The president of the Opera di Santa Croce conservation agency, Sanesi, said "We are distraught and we express our condolences to the victim's family.
"We are at the complete disposal of the authorities, to understand what happened".
She went on: "it still is not known when the Basilica will be able to reopen to the public." Sanesi said: "there is a multi-year plan for maintenance, restoration and prevention, drawn up in collaboration with the civil protection department.
"For this very reason, for all the work that has been done in a constant way over the years, we are really stunned and bewildered by what has happened and we ask ourselves how it could have happened".
A statement from the Opera said the basilica would remain closed Friday in mourning.
Florence Mayor Diego Nardella tweeted: "Deep sorrow for the accident in the Basilica di Santa Croce where the Spanish tourist lost his life. Ministry technicians already at the scene".
Rightwing populist Northern League leader Matteo Salvini said "whoever is responsible should pay".
Florence Archbishop Cardinal Giuseppe Betori voiced "condolences and sympathy" with the relatives of the dead tourist.
The Basilica di Santa Croce (Basilica of the Holy Cross) is one of the Tuscan capital's best-known churches.
The basilica is the principal Franciscan church in Florence, and a minor basilica of the Roman Catholic Church. It is situated on the Piazza di Santa Croce, about 800 metres south-east of the Duomo. The site, when first chosen, was in marshland outside the city walls. It is the burial place of some of the most illustrious Italians, such as Michelangelo, Galileo, Machiavelli, the poet Foscolo, the philosopher Gentile and the composer Rossini, thus it is known also as the Temple of the Italian Glories