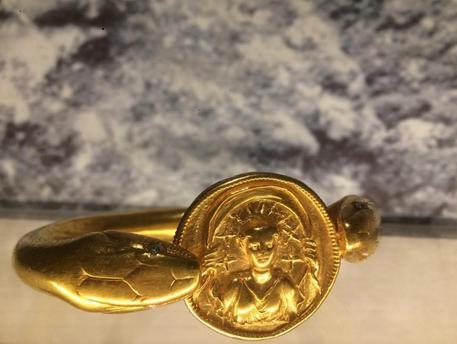 (ANSA) - Pompeii, September 12 - An exhibit at the Pompeii Antiquarium is showcasing treasures found inside one of the most well-known houses among the urban villas of the Insula Occidentalis at the archaeological site, the House of the Golden Bracelet.
The show - called "Treasures under the lapilli. Furnishings, frescoes and jewels from the Insula Occidentalis" - opened on Monday and runs through May 31, 2018.
The rich furnishings and parietal paintings on show belong to the House of the Golden Bracelet, one of the richest villas from the western district Insula Occidentalis, which has been closed to the public for decades and cannot yet be visited as the entire complex is under restoration.
And the golden bracelet after which the house was named represents one of the most valuable and beautiful artworks found in Pompeii.
The golden bracelet, one of the exhibit's highlights, was found on the wrist of a woman fleeing the catastrophic eruption of Mount Vesuvius that buried the Roman city in 79 AD.
The piece of jewelry, which weighs 610 grams, is characterized by two snakes' heads holding in their mouths a disk with the bust of Selene, the goddess of the moon.
The goddess is wearing a half moon-shaped tiara surrounded by seven stars, her arms raised to hold a veil.
Another fugitive was carrying a box in wood and bronze with 40 gold coins and 175 silver coins, which is also part of the exhibition.
Victims who died inside the luxury home, including two adults and a child who sought refuge in an under-stair cupboard, are on display as plaster casts made during excavation work.