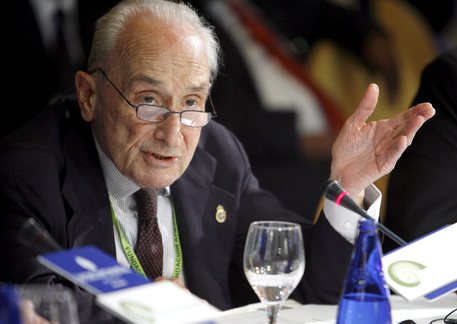 (ANSA) - Rome, April 4 - Eminent political scientist and public intellectual Giovanni Sartori died at the age of 92 Tuesday, the Corriere della Sera newspaper, for which he wrote editorials, announced. It said Florence-born Sartori, who would have turned 93 on May 13, was "the author of books on democracy translated all over the world, but also a caustic polemicist." It recalled that, writing for Corriere, he dubbed two electoral laws the Mattarellum and the Porcellum, showing his characteristic irony and wit.
Born in Florence in 1924, Sartori began his academic career as a lecturer in the history of modern philosophy. He founded the first political science chair in Italy, and was dean of the newly formed University of Florence's department of political science. Sartori served as Albert Schweitzer Professor in the Humanities at Columbia University from 1979 to 1994 and was later appointed Professor emeritus at the New York university.