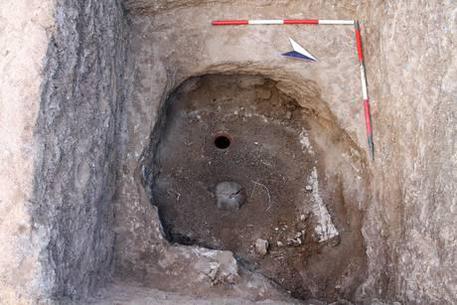 (ANSA) - Rome, September 29 - Archaeologists working in the Etruscan necropolis of Vulci near Viterbo have found 17 tombs containing a variety of ornaments and jewellery left by relatives of the deceased to facilitate their passage to the afterlife.
The tombs, dating back to between the third and ninth century BC, were found in the area known as Poggetto Mengarelli, where in recent months an illegal excavation by looters led archaeologists to uncover the now-famous Tomb of the Golden Scarab, that of an Etruscan princess buried around 700 B.C.
Objects found on Thursday include silver rings, bronze ornaments and vases discovered in a man's tomb.
Another tomb belonging to a young girl contains gold earrings and two siren statues. Further burial spots nearby hold a bronze mirror and other metal objects such as rings and a painted vase.
"The number of tombs present in this small area is impressive," said Alfonsina Russo, Archaeology Superintendent for Rome, adding that the objects found inside them were extremely varied and crossed the entire history of the Etruscans.
Carlo Casi, scientific director of the Vulci Foundation, said the excavations would continue and he expected much more to be uncovered.