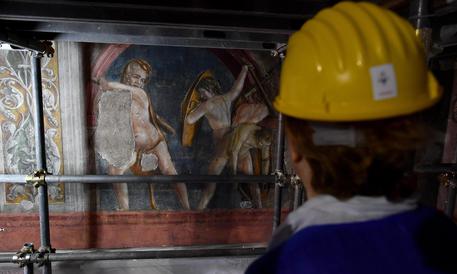 (ANSA) - Rome, July 27 - Four-month-long restoration work to bring back to its original splendor the Hercules Room of 15th-century Palazzo Venezia in downtown Rome has kicked off.
The room will be open to the public during the restoration as of September.
Funded with a donation of 150,000 euros by the Silvano Toti Foundation, the work will concern the room's wooden ceiling and frescoes representing some of the 12 labors of Hercules, which have been attributed by a number of art historians to Italian Renaissance master Andrea Mantegna.
The renovation will be carried out by L'Officina, a restoration consortium directed by Paolo Castellani, an art historian at the Polo Museale Lazio, the State museums of the region around Rome.
The room is one of the most important and refined at the palace built by Cardinal Pietro Barbo in the mid-15th century, shortly before he became Pope Paul III.
The director of the Polo Museale of Lazio, Edith Gabrielli, told ANSA that museum authorities chose to renovate the room because it is artistically one of the most valuable and interesting in Palazzo Venezia.
''We picked this room because it has one of the palace's most interesting set of frescoes and because it represents a tassel of Renaissance art in Rome that still needs to be discovered''.
A refined man and a collector, Pietro Barbo originally used it as a regalia room.
It is located on the first floor, also called 'piano nobile' in ancient Italian aristocratic palaces because it was where the noble owners would live.
The wooden ceiling and top part of the walls feature, among others, family crests and the representation of some of the 12 labors of Hercules, a series of episodes concerning penance tasks carried out by the great Greek hero.
Restorers Isabella Righetti and Rita Ciardi told ANSA that renovation work is urgently needed because of repeated and heavy-handed work carried out in the past.
They spoke in particular about ''disinfecting the wooden part of the ceiling and consolidating the plaster and painting''.
The restorers also said dried pigments used in previous restoration works hid the artworks' original colors.
''By cleaning them, we hope to rediscover the polish of the paintings, which were supposed to look like large windows that were open towards the outside''.
The restorers said they hoped to discover how the room was originally decorated and, in particular, who worked on the frescoes.
Art historians have long debated on the artist's identity and many believe he probably came from northern Italy.
More than one historian has attributed the work to Mantegna, who was an apprentice of Paduan painter Francesco Squarcione.
Others have instead attributed the artwork to an anonymous miniature painter at the pope's court.
Gabrielli said she doesn't believe Mantegna painted the frescoes.
However, she said the room is of fundamental importance ''to shed light on Roman Renaissance, which has been studied but not sufficiently examined because it has been partly obscured by the more famous Florentine Renaissance''.