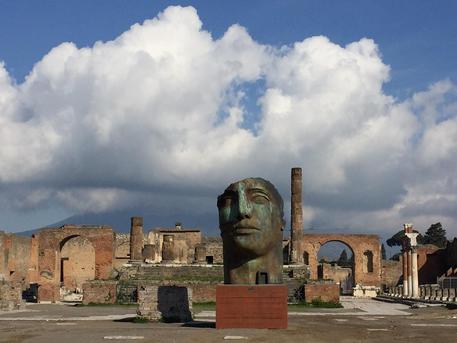 (ANSA) - Rome, May 3 - Late Polish sculptor Igor Mitoraj had chosen the exact locations for the 30 sculptures that will go on display starting May 14 in a traveling exhibition at Pompeii before his death in October 2014, Culture Minister Dario Franceschini said Tuesday.
Following the artist's wishes and under the artistic direction of Luca Pizza from the Atelier Mitoraj, the 30 large-scale sculptures depicting imposing mythological characters face off with the most well-known architecture of the ancient city after being placed in key locations in the archeological site of Pompeii - from the Forum to the Basilica, from the Gladiators' Barracks to the Via dell'Abbondanza.
"Mythological gods and heroes populate the streets and the squares of the city buried by Vesuvius, emerging like dreams from the ruins," said Pompeii Superintendent Massimo Osanna.
"Mute and iconic symbols, the works of Mitoraj remind us, in their immanence, of the deep value of classicism in contemporary culture".
"There are no theories, there are no explanations," Mitoraj said during an interview at his studio in Pietrasanta in northern Tuscany.
"The works impose themselves on me - I am their slave," the world-renowned artist said while guiding guests past a series of paintings, bronzes, plaster casts and marbles - all with classical features showing a bit of wear and tear.
"My models are the people of today - people who are living right now," he said.
Following Mitoraj's death in Paris in October 2014, his ashes were brought to their final resting place in Pietrasanta, where he had made his home.
The artist's exhibition in Pompeii was curated by the special superintendency for Pompeii together with Pietrasanta's Atelier Mitoraj and the Contini Art Gallery, and promoted by the Terzo Pilastro Foundation.
It follows previous exhibitions of a similar kind, that included a 2011 show in Sicily's Valley of the Temples near the city of Agrigento as well as the Trajan Markets in Rome.
In Pompeii, where Théophile Gautier wrote that only "two steps separate ancient life from modern life", the last dream of Mitoraj will be on display through January 2017.