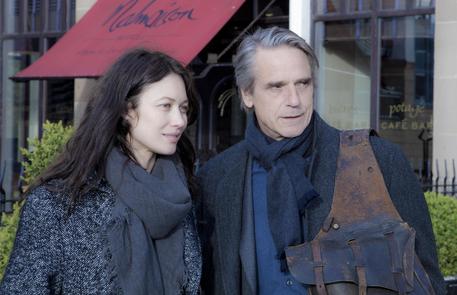 (ANSA) - Rome, January 12 - Italian director Giuseppe Tornatore is back after three years, following 2013's The Best Offer, with the forthcoming film The Correspondence, set for release Thursday on 400 screens throughout Italy.
The film, which had a budget of 10 million, stars Jeremy Irons and Olga Kurylenko in a story about eternal love, the never-ending kind between two different generations: not an easy task.
"Both in literature and in cinema, as Cesare Pavese said: happy love is rare because it doesn't interest writers," said Tornatore, explaining the nature of the film.
In fact, there's quite a bit of unhappiness in this movie, produced by Paco with RAI Cinema, and with a score composed by Ennio Morricone, with whom Tornatore has collaborated since his 1988 Oscar-winning film Cinema Paradiso.
Kurylenko plays Amy Ryan, a young university student who works as a film stuntwoman in her free time, who falls in love with her mature astrophysics professor Ed Phoerum, played by Irons.
At a certain point the man himself disappears, but his letters, videos, and Whatsapp messages continue.
The film poses not only the question of where he's disappeared to, but also whether or not love can live on through technology alone.
"I use technology and it interest me a lot, but I have to say that thanks to its development I was able to make this film that I'd had the idea for many years ago," Tornatore said.
"However it must be said that in romantic relationships, technology takes away a lot. And after all, isn't the human being perhaps the greatest technological machine," he said.
This is Tornatore's third film in English, and the director said that although it does have certain advantages, that fact ultimately has little bearing on his choices.
"Apart from the language, I only make films that I like," he said.
"Of course, with English you have a wider market. If, for example, The Best Offer had been filmed in Italian, I don't know if it would have had the same success abroad".
Tornatore said it was easy relegating Irons to a digital-only role, as happens in this film, in which there's only one scene in which he interacts with Kurylenko.
"He's a great actor who immediately understood what I wanted".
Irons concurred.
"It's true that I'm acting a role as if in front of a mirror," Irons said.
"I was only able to meet Olga briefly. In my mind I had the memories of this, but I must say that it's not that much different than being in front of an actress in real life," he said.
The English actor said it makes little difference to him whether the film he's in is a big-budget studio film or an independent.
"From the beginning of my career, on the one hand I've made interesting films, and, on the other hand, I've worked for high-budget productions. The latter showcase you, and are useful for getting a better budget for the independent films they ask you to work in," Irons said.
When asked about his advancing age, Irons said, "It's true that nowadays I get smaller roles, but on the other hand I only have about 16 years or so left to live, and I want to truly enjoy them," he said.
As far as being considered a sex symbol, Irons said he's found it useful, but feels he doesn't merit the title.
"You are what you are. Of course, on screen you're magnified eight times, you look different, but I'm grateful to the female public that considers me watchable, and to all of my female fans," he said.
As far as technology goes, Irons says "there's nothing like looking someone in the eye".
"We're animals. Every communication must be made face-to-face. The exasperated use of technology by the younger generations concerns me, however".
Ukrainian actress Kurylenko, who starred with Daniel Craig as Bond girl in Quantum of Solace, said she was enthusiastic about this role.
"It's a beautiful love story; I'd never read anything like it," she said.
"The only problem was that of sadness: staying sad for two months, the whole time the film lasted, wasn't easy".