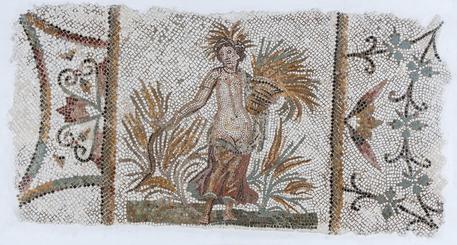 (by Catherine Hornby).
(ANSA) - Rome, December 3 - Eight classical treasures from Tunisia's Bardo National Museum, which suffered a terror attack earlier this year, are set to go on show in Italy as part of a project that aims to use cultural awareness to resolve conflicts and encourage peaceful cooperation.
The pieces will be displayed in the National Archaeological Museum in the northern Italian town of Aquileia - a UNESCO World Heritage site since 1998 and home to an ancient Roman Forum - as of the project called Wounded Archaeology, which also aims to draw attention to the destruction of precious monuments around the world.
The show will include a famous 2nd century AD head of Emperor Lucio Vero found in the ancient Roman city of Dougga in northern Tunisia, a statue of Jupiter, and colourful mosaics from the ancient sites of Uthina and Gightis. Antonio Zanardi Landi from the Aquileia Foundation said the idea for the exhibition developed when he visited Tunisia with Italian President Sergio Mattarella to show Italy's solidarity with the Tunisian people following a March jihadist attack on the museum in which 22 tourists were killed - including four Italians - along with two Tunisian Islamic State (ISIS) extremists. "The Bardo is the most important museum in northern Africa after Cairo's, and its collections show how the Mediterranean was a place of peaceful coexistence and mutual exchange 2,000 years ago," he said in a presentation.
Friuli Venezia Giulia Governor Debora Serracchiani said the exhibition was a chance to highlight the connections between Aquileia's own history and that of the entire Mediterranean.
"The best response to what is happening is not just military solutions, but also and above all the cultural route.
We have to deepen our shared knowledge, obviously with respect for the diversity that keeps us together. Europeans should remember that more," she said.
The exhibition running from December 6 to January 31.