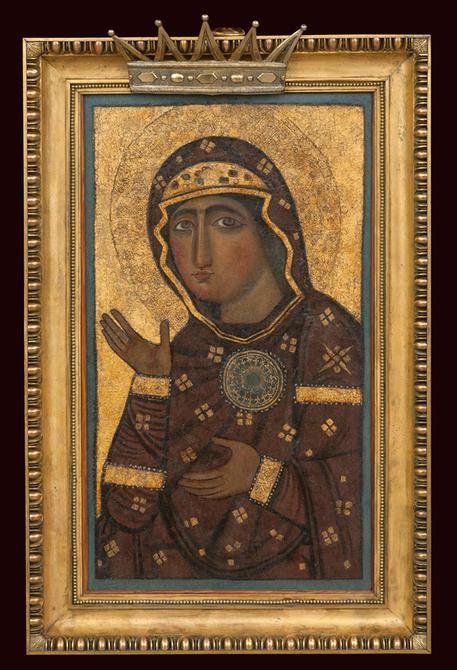 (ANSA) - Rome, May 21 - A 13th-century icon of the Madonna di Sant'Alessio is once again shining in the Rectory Church of Saints Boniface and Alexius on Rome's Aventine Hill following restoration work.
Experts at the Institute for Conservation and Restoration (ISCR) in Rome have recovered the golden-brown tones of the flesh and clothes, as well as a crown featuring precious stones.
Scholars followed the three-year long restoration to study the style of the icon and compare it with similar versions of the Madonna in other Rome churches.
Several such devotional images had been carefully secured in the second half of the 19th century and this painting had been previous restored in 1952 by Cesare Brandi.
It represented the idea of the Madonna interceding for the faithful, a style that was believed to be widespread in Rome in medieval times. Unusually, it depicts the Madonna alone, without the Christ Child, and she watches the observer slightly turned to the right, holding her right hand raised, while the left is pressed against her chest to indicate that the Virgin intercedes for all those who turn to her. The image was also venerated with the name of 'Advocata' to express her role as mediator between God and humanity.
When the icon arrived in the ISCR laboratories, they found fewer conservation problems than encountered with similar icons, such as that of the Madonna of Ara Coeli on Rome's Capitoline Hill.
Work focused on cleaning the surface to restore the vibrancy of the original paints.
As well, a device to measure temperature and humidity was tucked into the back of the frame.