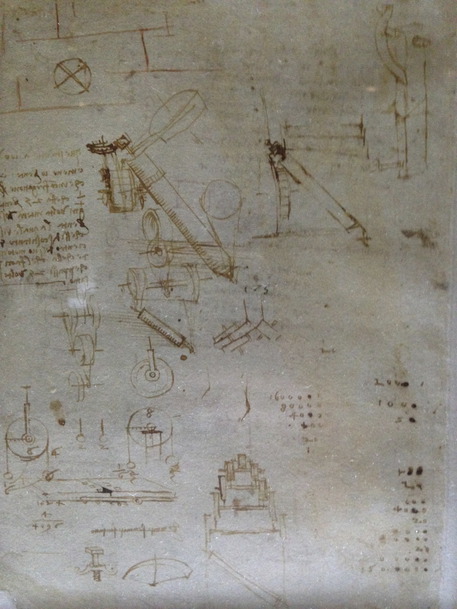 (ANSA) - Milan, March 11 - When people think of Milan, they seldom think of Leonardo Da Vinci. Yet the Renaissance Man par excellence left many important marks on Italy's economic capital during his stay at the end of the 15th century, including the world-famous "Last Supper" mural in the Santa Maria delle Grazie church. A series of exhibits during the year of Expo Milan 2015 seeks to highlight the strong bonds between the man and the city.
One such is "La Mente di Leonardo. Disegni di Leonardo dal Codice Atlantico" ("The Mind of Leonardo. Leonardo's Designs from the Codice Atlantico"), split into two parts and running March 10 through October 31, the last day of Expo. Each part will be shared between two locations - Milan's Veneranda Biblioteca Ambrosiana and the Sagrestia Monumentale del Bramante, in Santa Maria delle Grazie. Together, they mark the end of a cycle of 24 exhibits about the Codex Atlanticus, as it is also known, held in sequence since 2009. Over two, three-month periods, each site will host 22 designs from the Codex and will draw visitors' attention to the Renaissance master's skills - among others - as an engineer, astronomer, botanist, architect, mapmaker and inventor. Overall 88 prints will be on display, with detailed explanations of what they are.
"More than half of the drawings on display in this double-exhibit have never before been seen in public, including Leonardo's plans for the palace of King Francis 1st of France as well as studies of concave mirrors and hydraulics," exhibit curator Pietro Marani, explained during a press conference Tuesday. "La Mente di Leonardo" will take place as Milan's Palazzo Reale and Castello Sforzesco museums - and even the city's aquarium - all hold their own exhibits on Leonardo's years in the city. Prior to 2008, none of the designs from the Codex Atlanticus had ever been seen before. In order to loan a few images to a museum, the entire volume would have had to be loaned, as all the 1,118 drawings were bound in a single volume, Marani said. "Imagine the insurance costs alone," he said, joking. The Codex Atlanticus, which is owned by the Biblioteca Ambrosiana, shouldn't be confused with the Codex Leicester, another of Da Vinci's scientific journals, which holds the world record sale price for a manuscript: it was acquired at a Christie's auction in 1994 by Microsoft founder Bill Gates for just shy of $31 million. There is no estimate for the value of the Codice Atlantico, representatives from the Fondazione Cardinale Federico Borromeo - which supports the Biblioteca Ambrosiana in its cultural efforts and is a big financial backer of the Codice exhibits - told Ansa after the conference. However estimates of insurance coverage for the manuscript - which organizers said was the largest, single collection of Leonardo's drawings to exist - range from one to three million euros per page, they said.
Named for the oversize paper sheets onto which it is printed - similar to those used in Leonardo's days to print atlases and maps and very different from the small little notebooks the master was accustomed to using - the Codice Atlantico embraces the entire intellectual life of Da Vinci over a period of more than 40 years, from 1478-1519, Marani said. The Codex changed hands many times in its storied history, reaching the Biblioteca Ambrosiana in 1815. Interest for Leonardo's scientific drawings seems to be strong all over the world and parts of the Codex have been displayed in other cities, including Jerusalem, Tokyo and, currently, Singapore. As the conference was taking place, Fondazione Borromeo Chairman Giorgio Ricchebuono was traveling to Azerbaijan to discuss the possibility of an exhibit in Baku.
While pictures of Da Vinci's flying machine designs are fairly common and perhaps no longer so surprising, seeing original works so close up - in the master's famous right-to-left mirror writing scrawl - is a powerful and absorbing experience, leaving viewers ever more amazed with the genius of Leonardo.