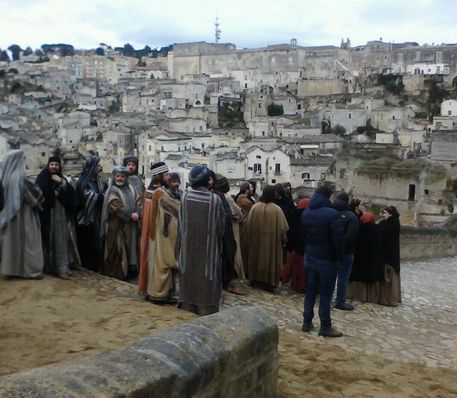 (ANSA) - Matera, February 2 - Inside a film set protected from heavy rains by scaffolding, shooting began Monday on the remake of the historical drama Ben Hur in the southeastern Italian city of Matera.
Director Timur Bekmambetov selected Matera for its famous ancient cave dwellings known as Sassi in the city's historical centre - a familiar setting from other Hollywood blockbuster films.
The ancient stones will play the role of Jerusalem for early scenes in the story of Ben Hur, and local residents of Matera were among the extras in the film, which is set at the time of Christ.
Tourists also gawked at the production site, hoping to catch a glimpse of some of the film's stars including Morgan Freeman and Jack Huston.
Some 1,000 extras were selected in November to play Roman soldiers in the remake of the 1959 blockbuster that starred Charlton Heston and Jack Hawkins.
Filming is expected to continue for about a month among the Sassi, which were named a UNESCO World Heritage Site and have become famous as the setting for films including 1964's The Gospel According to St Matthew by Pier Paolo Pasolini, and Mel Gibson's 2004 The Passion of the Christ.
The production will move to Cinecittà in Rome.