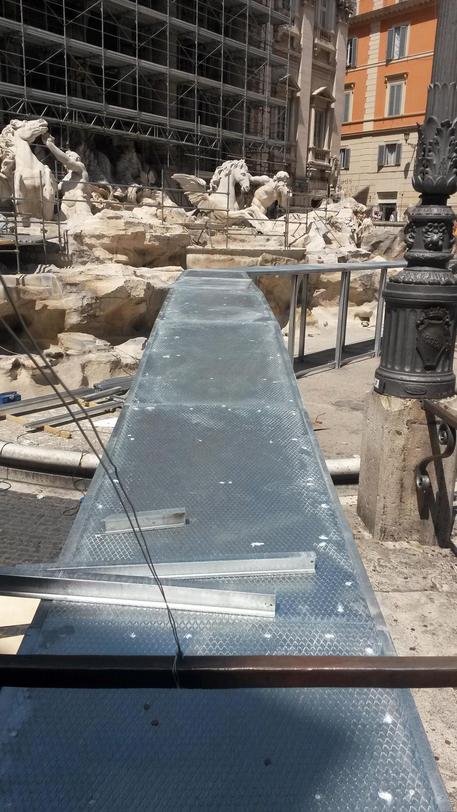 (ANSA) - Rome, June 30 - Rome Mayor Ignazio Marino and the management of the Fendi fashion house on Monday opened restoration work on the world-famous Trevi Fountain, one of the most iconic spots in Rome.
"We hope to restore this treasured landmark to the city in the autumn of 2015, Marino said.
"Doing a traditional lucky coin toss into the legendary fountain," Marino said "it's fundamental to get private sponsors for this kind of large-scale work where public funds simply aren't enough to cover the costs". Workers on Monday were giving the final touches to a walkway above the central portion of the fountain which will enable tourists to get a better glimpse of ongoing work on the 18th-century Baroque masterpiece by Nicola Salvi immortalized by many movie stars, including Anita Ekberg and Marcello Mastroianni in Federico Fellini's La Dolce Vita. A small white fountain was also installed on Monday morning so visitors will still be able to cast their coins for luck.
Water has been drained for the renovation process which is expected to last one year and a half.
Fendi is funding the restoration of the Trevi Fountain in an initiative similar to work on the Colosseum and the Spanish steps, funded respectively by Tod's entrepreneur Diego Della Valle and jeweler Bulgari.
Fendi, one of the biggest names in Italian fashion, has donated 2.12 million euros to restore the Trevi Fountain in the first of a series of projects aimed to protect Rome's historic fountains.
In January, then Rome mayor Gianni Alemanno and the chairman and chief executive of Fendi, Pietro Beccari, announced Fendi's ambitious plan to save one of the city's most romantic landmarks at a joint media conference with Silvia Venturini Fendi and designer Karl Lagerfeld, the creative director of Fendi who is also backing the project.
Entitled 'Fendi for Fountains', the initiative includes sponsorship for a two-year restoration of the Trevi Fountain as well as plans to restore the Four Fountains sculpture on the busy Via XX September in the heart of the Eternal City.
After several months of negotiations Fendi handed over the funds for the restoration of the Trevi in December last year and made a significant contribution towards the preservation of the other fountain, which is covered in the sooty emissions of the thousands of cars that pass by it every day.
"The restoration of the Trevi Fountain, one of the best-known Roman monuments in the world, shows the importance of cooperation between public and private support," Mayor Alemanno said at the time.
Italy's cash-strapped cultural authorities are increasingly looking to private sponsors for support despite widespread concern that they might commercially exploit their link with the country's beloved monuments.
Last year cultural officials approved a controversial plan to restore the Colosseum with 25 million euros in funding provided by luxury shoemaker Tod's.
Opponents have raised questions about whether Tod's will exploit the move for publicity and its commencement was long delayed by a legal challenge.
But officials stressed that Fendi was willing to cover the cost of covering the restoration of the Trevi without seeking any publicity in return.
"This is an historic day for our city," said Dino Gasperini, the councillor for cultural affairs and the historic centre. "This doesn't happen every day".
The Trevi Fountain was built between 1732 and 1762 above an ancient Roman aqueduct.
Every year millions of tourists from around the world stop by the fountain for a photo or to toss a coin over their shoulder which according to local legend will bring them back to Rome.
Last year the city of Rome was forced to carry out emergency work at a cost of 320,000 euros after a piece of the monument fell off and Alemanno appealed to large companies and wealthy individuals to intervene and help save the monument.
At Monday's media conference, Umberto Broccoli, Rome's cultural superintendent, held up a fallen fragment of the fountain to underscore the urgency and importance of the Fendi proposal.
Restoration of the Trevi is expected to take 20 months and be completed in 2015 while work on the Four Fountains monument is expected to be put to tender before the end of 2013.