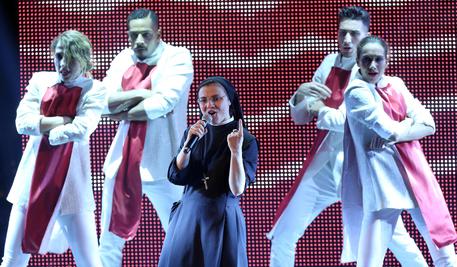 A young singing nun, Sister Cristina Scuccia, has vowed to return to her life of prayer, school-teaching and preaching after winning Italy's version of the popular TV talent show The Voice.
The 25-year-old nun thanked God after prevailing in the final of the show on State broadcaster Rai, which ended early on Friday.
"My presence here is not down to me, it's thanks to the man upstairs," said the Sicilian nun, known as Suor Cristina after becoming a household name in Italy.
"My aim was to say that I have met Jesus. I have a gift and God gave me that gift and I have used it to say that God has taken nothing away from me.
"Now I want to return to my priorities, which are prayer, getting up early and teaching at my school. I will never give up on my vows and the greatest love of my life for a singing career".
Scuccia became an Internet sensation after winning over the judges at a blind audition in March with her version of Alicia Keys' No One - the clip of which has received more than 50 million hits on YouTube.
After crushing her nearest rival by claiming 62% of the popular vote in the final, she led the audience in reciting the Lord's Prayer.
Her victory gives her a recording contract with Universal.
"I'll discuss everything with my superiors," Scuccia said.
"Nothing is ruled out in evangelization and we'll take our message out on the streets if necessary. "When I make a disc of my songs, they will be about love and real situations, with language that communicates to everyone".