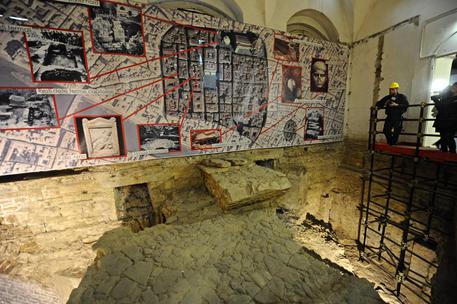 (ANSA) - Florence, April 14 - Archaeologists digging up the remains of an ancient Roman theatre discovered under the Palazzo Vecchio in Florence have found a "vomitorium" or corridor used by as many as 15,000 theatre goers in the first and second centuries A.D., city officials say.
The latest find at the site in the centre of the Tuscan capital includes the original painted stone pavements along which spectators used to walk from the outer circle of the theatre to the orchestra pit, which already had been excavated during previous digs. Also discovered were well shafts going as deep as more than 10 metres below the current surface of Florence, providing water and waste disposal for the theatre, as well as remains of the foundations of the walls used to build the Salone dei Cinquecento.
The Roman theatre was built originally for use by an audience of some 7,000 people but at the height of its popularity in the first and second centuries AD as many as 10,000-15,000 spectators are believed to have packed in to enjoy performances there, the archaeologists say.
The remains of the theatre cover a vast portion of land under Palazzo Vecchio and Palazzo Gondi, with the cavea cells in which wild animals were confined facing the Piazza della Signoria and the 'scena' or stage along what is now the via dei Leoni.
The theatre was in use until the 5th century before being abandoned and eventually forgotten. Its remains were gradually brought to light in the 18th century when Florence was transformed into the first capital of a united Italy in 1865 and the city centre was systematically modernised.
A new archeological investigation was carried out at the end of the 1990's with full-scale excavations taking place between 2004 and 2010.