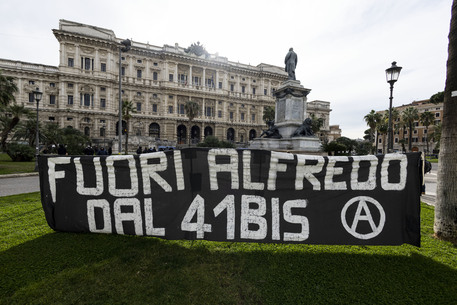 (ANSA) - ROME, JAN 25 - A high court appeal hearing by Italian anarchist leader Alfredo Cospito against the unprecedentedly tough prison regime over which he has been on hunger strike for three months was set for April 20 on Wednesday.
The supreme Court of Cassation will thus hear the appeal against the mafia-style 41 bis prison regime in three months' time.
Amnesty International on Tuesday made a fresh appeal for Cospito, who has lost over 40kg in his almost 100-day hunger strike against the 41 bis regimen.
"Alfredo Cospito has now reached almost 100 days of hunger strike," said AI on the Informal Anarchist Federation (FAI) leader, the first Italian anarchist to be placed under the 41-bis regime.
"We reiterate that it is the duty of the Italian authorities to fulfil their obligations to protect and respect the detainee's human rights, also taking into account the harsh conditions of the 41 bis regime to which he is subjected." Cospito, 55, on January 13 appealed to Italy's justice minister against his prison conditions.
Normally only jailed mafiosi are subjected to the regime, which mandates almost complete isolation from the outside world.
Cospito had already appealed to the Supreme Court of Cassation on December 27.
Cospito, who has been sentenced to four years of 41 bis while he is serving two sentences totalling 30 years for terror attacks, recently saw an appeal turned down by a Rome surveillance court.
A lawyer for Cospito, whose weight loss has spurred Italy's inmates ombudsman to voice fears for his life, said the fresh appeal to Justice Minister Carlo Nordio was "based on new information, not submitted to the Rome surveillance court".
As sit-ins and demos in favour of Cospito continue daily, judicial sources said the case would first have to go to Turin prosecutors again before Nordio can examine the plea.
A number of high-ranking magistrates have issued an appeal to save Cospito's life.
There have been several recent FAI attacks in support of Cospito.
Judges recently ruled that Cospito should stay under the 41 bis conditions because otherwise there was a risk of his running FAI operations from inside jail.
On December 9 Greek anarchists linked to FAI claimed responsibility for the firebombing of two cars belonging to an Italian diplomat in the Greek capital a week previously.
The Greek group, which calls itself after a protester killed by a Carabiniere in self-defence at the 2001 Genoa G8 riots, said they were acting in solidarity with Cospito.
The group, Carlo Giuliani Vendetta Nucleus, said it was supporting the hunger strike of Cospito, who is serving 20 years for a bomb attack on a Carabinieri training academy at Fossano near Cuneo in Piedmont in 2006 and a further 10 years and eight months for wounding Ansaldo Nucleare Managing Director Roberto Adinolfi in Genoa in 2012.
The carbomb attacks against Athens embassy counsellor Susanna Schlein, sister of centre-left Democratic Party (PD) leadership candidate Elly Schlein, took place at dawn on Friday December 2 and were soon attributed to anarchists like the FAI, who had shouted threatening slogans during Cospito's recent appeals trial.
Foreign Minister Antonio Tajani said Schlein survived the attacks "by a miracle".
Both Schlein sisters have now been assigned police protection.
After the firebombings, FAI militants issued the mocking message "Susanna Schlein should learn to park".
Rome prosecutors said last month they were opening a probe into arson attacks on ATMs and rubbish containers in two parts of the Italian capital on a recent Saturday night by Cospito supporters. (ANSA).