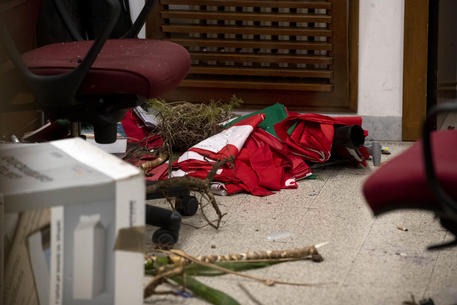 (ANSA) - ROME, JAN 23 - Three men were found guilty Monday of taking part in an assault on the Rome headquarters of Italian trade union CGIL on October 9, 2021 when an anti-Green Pass COVID certificate protest was hijacked by members of the far-right Forza Nuova (FN, New Force) movement.
The three are not FN members.
The preliminary hearings judge (GUP), at the end of a trial carried out in abridged form, imposed six years on Andrea Savaia, a 54-year-old Genoese and four years on two Romans, 37-year-old Maurizio Ciocca and Daniel De Filippis.
Against Savaia, who is linked to the no green pass movement, the prosecutor charged him with the crimes of devastation and resistance to a public official, while the other two were only charged with devastation.
For this affair, the Ligurian activist had been placed under house arrest, while the two Romans were subjected to a surveillance order.
Last July a Rome judge handed down the first six guilty verdicts in the assault on the headquarters of CGIL, Italy's biggest and most leftwing union, in Rome in October the previous year.
The attack was led by FN members who hijacked the protest against the COVID-19 Green Pass health certificate to ransack the union offices.
A preliminary hearings judge gave out sentences ranging from six years to four and a half years.
The son of the girlfriend of FN's Rome chief Giuliano Castellino, Fabio Corradetti, and the group's Palermo leader Massimiliano Ursino, both got six years.
Castellino is also a defendant in the case, as is FN national leader Roberto Fiore. (ANSA).