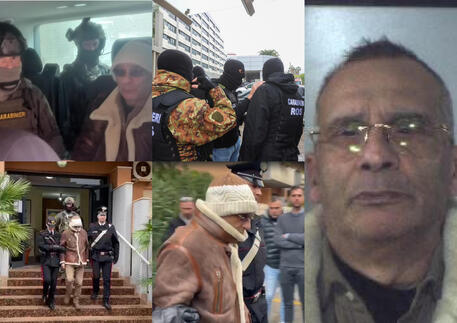 Mafia boss Matteo Messina Denaro, Italy's most wanted man, has been arrested by the Carabinieri police's ROS unit after 30 years on the run, sources said on Monday.
He was arrested inside the day hospital of a private clinic in Palermo and did not put up resistance, the sources said.
Premier Giorgia Meloni hailed the arrest as a "great victory for the State".
Noting that it happened the day after the anniversary of late Cosa Nostra boss-of.bosses Totò Riina's arrest in 1993, she said it shows that the State "does not give up in the face of the Mafia".
"My warmest thanks and those of the entire government go to the police forces, in particular to the Carabinieri Ros section, the National Anti-Mafia Prosecutor's Office, and the Palermo Prosecutor's Office, for the capture of the most significant figure in the mafia," she added.
"The government will make sure that the fight against mafia crime continues without respite, as demonstrated by the fact that this executive's first measure - the defence of the 'carcere ostativo' (tough prison regime for mafia convicts) - concerned precisely this matter." The 60-year-old mobster, aka Diabollik, had been on the run since 1993.
He had having treatment at the clinic, which is called 'La Maddalena', for over a year, sources said.
Other patients clapped and shouted "Bravi!" (well done) during the arrest.
Messina Denaro was taken to the San Lorenzo Carabinieri barracks in Palermo after the operation.
The mobster, who got his nickname from the Italian comic book character Diabolik, a masked superthief anti-hero, was seen by some experts as the boss of bosses within the Mafia after the deaths of Bernardo 'The Tractor' Provenzano in 2016 and 'The Beast' Riina in 2017, although other experts said he was not at the very summit of Mafia power, without being able to say who occupies that post, possibly because it is vacant.
Giovanni Falcon'e assassination was ordered by then boss of bosses Riina with the agreement of former co-boss Provenzano.
In 2020, Messina Denaro was also convicted of complicity in greenlighting the 1992 bombings that killed Falcone and his friend and colleague Paolo Borsellino two months later.
The bombs, which also killed Falcone 's wife and members of both prosecutors' security details, sparked a strong reaction from the State.
Reportedly idolised by Cosa Nostra's younger troops because of his ruthlessness and playboy-like charisma, Messina Denaro sealed a reputation for brutality by murdering a rival Trapani boss and strangling his three-months-pregnant girlfriend