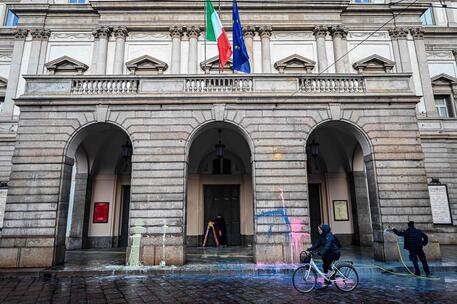 (ANSA) - ROME, DEC 7 - Five members of Italy's Ultima Generazione (Last Generation, UG) climate civil-disobedience group were detained by Milan police on Wednesday after throwing blue and pink paint at the entrance of La Scala before the premiere of the iconic opera house's 2022-23 season.
It is the latest in a series of controversial protests UG has carried out to highlight the need to address the climate crisis.
The group of protesters held up a banner reading 'Ultima Generazione - No Gas, No Coal' before the police intervened.
The five were taken to the police headquarters in the city to be identified and are set to be reported to prosecutors.
UG's actions have included blocking rush-hour traffic in big cities, disrupting people using private flights, spraying paint over the offices of institutions linked to fossil fuels and stunts involving important works of art.
The opening night of La Scala's opera season frequently attracts protests.
Several groups are gearing up to make their voices heard this year, when Premier Giorgia Meloni will attend the premiere for the first time as Italy's head of government.
President Sergio Mattarella and European Commission President Ursula von der Leyen will also be among the officials present when the opera house kicks off the season with a performance of Russian composer Modest Mussorgsky's Boris Godunov.
Groups form Milan anti-capitalist centres such as 'il Cantiere' and 'il Lambretta' said they will stage a protest.
The Cobas left.wing union has said its members will be on the streets too and they also intend to stage a "candle-lit dinner' stunt to show how people are unable to afford to pay their energy bills because of the cost-of-living crisis.
Representatives of the Ukrainian community will be present as well to protest against Russia's invasion of their country.
Ukraine's consul in Milan had asked La Scala not to open its season with Boris Godunov to avert possible propaganda use of it by Moscow.
Ultima Generazione is demanding the immediate halt to the reopening of decommission coal plants and the scrapping of new gas-drilling projects in Italy.
It also wants the government to take action to increase the energy generated by renewables in Italy by at least 20GW each year.
UG is part of the A22 network of climate civil-disobedience groups active in several countries, such as Just Stop Oil in the UK, Stop Old Growth in Canada, Derniere Renovation in France and Declare Emergency in the United States. (ANSA).