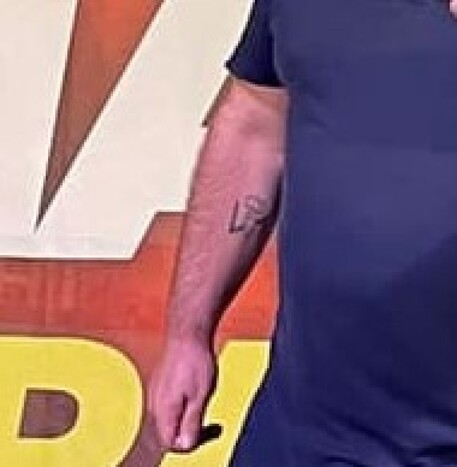 (ANSA) - ROME, OCT 5 - A row has erupted in Italy over an allegedly neofascist tattoo on the arm of the new Bologna chief of the rightwing League party, Cristiano Di Martino.
The tattoo is a runic symbol used by the SS and banned in Germany, a wolf's tooth under a fist holding a hammer.
It was a symbol of the subversive neo-fascist group Terza Posizione (Third Position), active in Italy in the Years of Lead of leftwing and rightwing terror in the 1970s and '80s.
Di Martino told the Corriere di Bologna newspaper that "I have never been part of that group, a I had that tattoo done when I was a young lad because I've always liked Norse mythology.
"When I had it done, at the age of 16, I didn't even know what Terza Posizione was" he said, adding about the fist holding the hammer that "I've always been a fan of comics, and I like Thor".
He went on: "there are secretaries around with the (neofascist) Celtic Cross and I must be crucified for a tattoo done in 1986? "Sometimes in your youth you do things that perhaps might have been done differently over the course of the years, but I've never had anything to do with certain worlds".
Roman-born Di Martino has been in Emilia-Romagna since 2010 and was once a provincial councillor for the now defunct centre-right People of Freedom (PDL) party of Silvio Berlusconi in Ferrara.
In that capacity, in 2011, he took part in an event promoted by far right group CasaPound alongside Gabriele Adinolfi, a founding member of Terza Posizione.
Another former Terza Posizione member, Luigi Ciavardini, was among the neofascist terrorists found guilty for the August 2, 1980 Bologna train station bombing that left 85 dead and 200 wounded.
The head of the association of victims' relatives for that massacre, Paolo Bolognesi, said Wednesday "he (Di Martino) could have it removed, it is not a nice thing for Bologna. I'm amazed, let's hope it's not a sign of a time in which all kinds of things can be legitimized".
He added: "Anyone engaged in politics should know what Terza Posizione is, and what its symbols are. It's not a nice gesture".