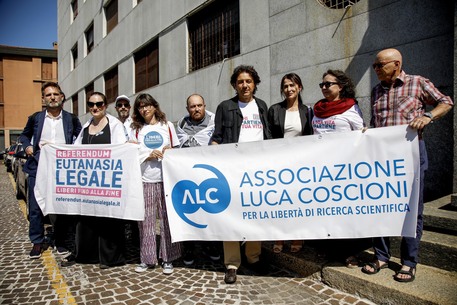 (ANSA) - ROME, AUG 17 - The Marche regional health authority's medical commission on Wednesday gave the green light to a drug to be given to a 44-year-old tetraplegic man called Antonio to end his life via assisted suicide.
The man has been fighting for the right to end his life since he lost the use of his limbs in a car crash in 2014.
He is being helped by the right-to-die Luca Coscioni Association.
On August 3, the association's lead campaigner Marco Cappato reported himself to Carabinieri police in Milan after accompanying a terminally ill cancer patient to a clinic in Switzerland to commit assisted suicide.
The case of the woman, a 69-year-old named Elena, had moved the nation after she recorded a video message explaining her decision before she died.
"I would have preferred to end my life in my own bed," she said.
Cappato risks a jail term of up to 12 years for assisting suicide.
The activist, who has also helped other people in similar situations, berated Italy's politicians for failing to pass legislation on end-of-life issues.
"There has been no response from the parliament, from the political world, from the leaders of the big parties," he said.
"The people's-initiative bill that we presented nine years ago has not been discussed, not even for a minute, during the last two parliamentary terms.
"We have come to this.
"When faced with Elena's request, we could have looked the other way or give her the help that she sought, in full view of everyone and taking total responsibility".
Cappato helped set a legal precedent when he helped DJ Fabo, a tetraplegic Roman disk jockey, commit suicide in a Swiss clinic in 2017.
The Constitutional Court subsequently cleared Cappato in relation to this case, saying assisted suicide could be legitimate in some cases if the person wanting to die was in intolerable suffering.
The court also called on parliament to pass legislation dealing with end-of-life issues, something that it has failed to do so far.
In June Antonio became the first person to legally commit assisted suicide in Italy on the basis of the Constitutional Court ruling.
Elena was not eligible to commit assisted suicide in Italy due to the specifics of her case. (ANSA).