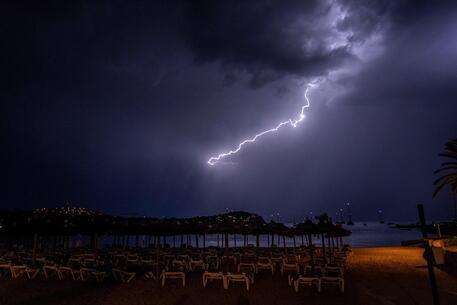 (ANSA) - ROME, AUG 9 - Four people, members of the same family, were injured by a lightning strike on a beach at Soverato near Catanzaro in Calabria on Monday evening.
The lightning struck amid one of the thunderstorms that have hit Italy over the last two days, briefly breaking the sticky afa heat.
The most seriously hurt was a man who was taken to the intensive care unit of a Catanzaro hospital.
His wife and their six-year-old son sustained less serious injuries and were taken to the same hospital.
The mother-in-law sustained slight injuries and was treated at a hospital in Soverato.
The family is of Calabrian origin but lives in Bergamo in northern Lombardy.
They had returned to Soverato for a summer holiday.
The part of the beach where the lightning struck was crowded with holidaymakers but no one else was hit.
Italy is set for a fresh heat wave after the wave of thunderstorms ends later this week. (ANSA).