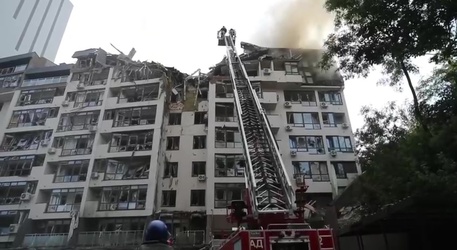 (ANSA) - BRUSSELS, JUN 27 - Four months after the outbreak of war in Ukraine, the EU is already looking to Kyiv's future.
With the start of its EU accession procedures, a post-war reconstruction plan has been drafted in line with that process.
In this context, the European Investment Bank (EIB) is ready to play an important role in the financial management of the solidarity fund proposed by Brussels.
"Just a few months from the invasion, in collaboration with the European Commission, we have prepared a solidarity package for Ukraine that earmarks 668 million euros of direct immediate assistance for the Ukrainian government to address its most immediate financial requirements" says the head of the EIB's mission in Ukraine, Jean-Erik De Zagon, in an interview for the bi-annual TerritoriALL report, drafted by the ESPON cooperation programme, which is specialized in regional studies.
While the priority remains "immediate support to address the humanitarian crisis and stop the aggression", Brussels has already started working on a post-war reconstruction plan, says De Zagon, stressing the role of the EU and other key partners in this phase.
Ukraine's rebirth will entail a 'reconstruction platform', says the EIB's chief representative in Ukraine, "a strategic, high-level organ" headed by the Ukrainian government together with the European Commission, which would reunite the partners and the supporting organizations, including EU member States , other bilateral and multilateral partners and international financial institutions, including the EIB.
"The EU's support for reconstruction will be linked to the implementation of reforms and anti-corruption measures in line with (Kyiv's) European path", says De Zagon, adding that the reconstruction plan would become the basis for the EU and the other partners to determine the prioritary areas to fund.
The EIB, which opened a regional office in Kyiv in 2007, is ready to play this role.
In the last 15 years the bank has invested seven billion euros in Ukraine in social and economic infrastructure, transport and connectivity, energy efficiency, the development of SMEs, climate action and innovation.
After the invasion the bank responded to Kyiv's request for emergency support and is now gearing to support the post-war reconstruction plans.
"As an EU bank we are ready to support the (reconstruction) efforts," concludes De Zagon.
"We have the instruments, the competences, the capacity for consultancy and the right relations in Ukraine to prepare the investments, guarantee their full compliance with the EU's policies and objectives, and attract private-sector investments". (ANSA).