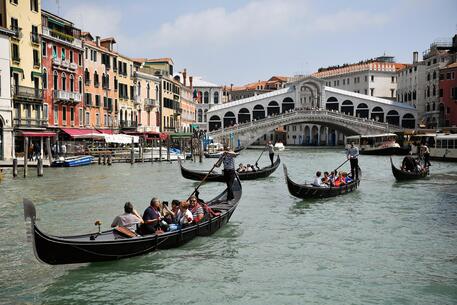 (ANSA) - ROME, MAY 13 - Venice Mayor Luigi Brugnaro on Thursday personally stopped a drunk man who had stripped off and jumped into the Grand Canal for a cooling dip during the current heat wave.
Swimming in Venice's canals is banned.
The incident, a short distance from the Constitution Bridge and near Piazzale Roma's rail and bus terminals, was captured by the Telechiara TV station.
In the footage, Brugnaro is seen getting out of the municipal launch he was travelling in, walking along the canal bank, and blocking the man, visibly drunk, who had dived into the water half-naked.
While his staff calls police, the first citizen speaks to the man and then hands him over to the local police.
The man was subsequently issued a DASPO ban on returning to Venice, and a 459 euro fine for illegal swimming, obscene acts in a public place, resisting arrest and causing a danger to navigation. (ANSA).