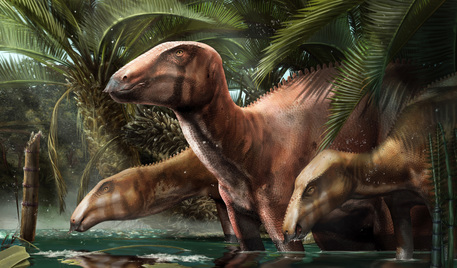 (ANSA) - ROME, DEC 2 - Researchers said Thursday they had found the "most important" Italian dinosaur fossil site, near the northeastern port city of Trieste.
The site at Villaggio del Pescatore contains at least seven new dinosaur fossils including one virtually complete, said the palaeontologists.
The international research group, led by Federico Fanti of Bologna University, has published its findings in the journal Scientific Reports.
The dinosaur is Tethyshadros insularis, an herbivore that lived 80 million years ago and reached up to five metres in length.
The first exemplar, dubbed Antonio, was discovered 30 years ago.
"Already, 30 years ago, the Villaggio del Pescatore site brought to light an extraordinary fossil remains, a practically complete individual of Tethyshadros insularis," Fanti told ANSA.
"But it was a single find, like all the others done on Italian territory. Now for the first time we have a whole group, a site where we have many individuals and we can excavate to analyse and compare their remains".
The area, a former limestone quarry, has unearthed various remains, of seven to 11 individuals including a particularly complete one the researchers have dubbed Bruno.
After comparing the new remains with those of the first dinosaur Antonio, the experts have also realised that the first remains in fact belonged to a young individual and not a 'dwarf' species, typical of islands, as had hitherto been believed.
(ANSA).