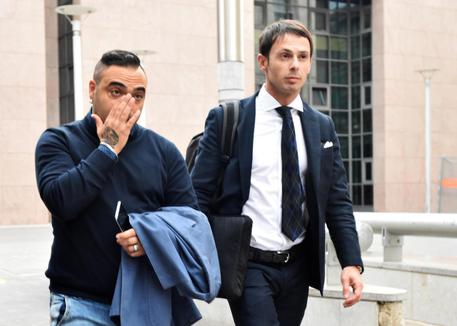 (ANSA) - ROME, NOV 24 - Former Palermo and Italy striker Fabrizio Miccoli got three and a half years in jail Wednesday for extortion aggravated by mafia methods.
Miccoli, 42, handed himself in to a prison in the northern city of Rovigo after the supreme Court of Cassation upheld a January 2020 verdict from a Palermo appeals court.
Miccoli was found guilty of commissioning the son of a mafia boss to get back 12,000 euros from a disco owner in Palermo on behalf of a former Palermo FC physio.
During the probe police intercepted a phone conversation in which Miccoli described slain anti-Mafia magistrate Giovanni Falcone as "muck", an assertion for which he later tearfully apologised.
Miccoli scored 103 goals in 259 matches in Serie A across nine seasons, representing Perugia, Juventus, Fiorentina and Palermo, also spending time on loan to Benfica in Portugal. He later spent two seasons with his hometown club Lecce in Lega Pro. He retired in 2015 after playing for Maltese club Birkirkara.
In a two-year international career, Miccoli scored twice in ten appearances for Italy.
Miccoli currently serves as assistant coach of Albanian second division side, FK Dinamo Tirana. (ANSA).