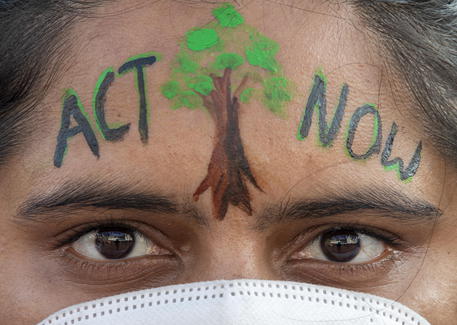 (By Paul Virgo) (ANSA) - ROME, NOV 19 - COP26 was often described as the world's 'last, best chance' to avert catastrophic climate change in the run-up to it.
If that was the billing, the UN Climate Conference in Glasgow clearly failed.
Not even the most optimistic observers would argue that the pledges made get anywhere near to meeting the target of limiting global heating to within 1.5° Celsius above pre-industrial levels in order to avert the looming global calamity.
But as failures go, it was not a total one.
There were commitments to stop deforestation, to slash methane emissions, to phase down the use of coal and end 'inefficient' fossil-fuel subsidies.
The 1.5° C target was also kept alive thanks to the agreement States made to revisit their Nationally Determined Contributions (NDCs) to emission cuts at COP 27 in Egypt next year, rather than in five years' time as originally envisioned by the 2015 Paris Agreement.
It might not be enough, but the growing pressure from civil society, led by youth groups, gives ground for hope that this can be turned into something more substantial.
The likes of Fridays For Future campaigners Greta Thunberg, Vanessa Nakate and Italy's Martina Comparelli are making it harder for political leaders to fob the public off without delivering real action, as they have consistently done up to now, and this pressure is not going to let up.
Furthermore, this pressure has already delivered concrete results.
Experts have pointed to the achievements achieved at Glasgow by YOUNGO, a global network of children and young activists and youth NGOs, regarding the text that implements article 6 of the Paris Agreement in relation to carbon markets.
"One of the biggest results achieved at COP26 was the approval of a text for article 6 of the Paris agreement," said Domenico Vito, an Italian member of the Climate Reality Project, the global network of volunteer climate activists founded by former United States Vice President and Nobel Peace Prize-winner Al Gore.
"This article is considered the financial arm of the Paris agreement and it was widely called into question from the start.
"Indeed, many people think it should not even exist," Vito told ANSA.
"In the various versions of the article that came out during the negotiations, references to the respect of human rights in relation to its implementation appeared in some sections and then disappeared later.
"There remained doubts about where the respect of human rights would actually be observed.
"The YOUNGO constituency and many other civil society representatives pressed for an independent appeals mechanism to be included and the version that was approved referred to an appeals process, although not a mechanism".
Vito said another example was the pressure youth groups applied in order to axe some of the loopholes in the carbon trading system, such as the possibility for countries to obtain credits by simply approving laws and projects for emissions cuts, without necessarily actually following through and delivering them.
"We YOUNGO members and many other civil society representatives lobbied for days for an independent grievance mechanism to be included in the text, and the reference to an independent complaint process," Vladistad Malashevskyy, an expert and activist who is part of the YOUNGO group, told ANSA.
"That draft was then approved and it is the current text.
"Considering the abyss left by COP25, you can say that the final agreement on article 6, including in the light of the versions that emerged during the negotiations, could have been much worse.
"The path that this article went through highlights that the level of ambition taken to Glasgow by the parties was not even minimally sufficient to address this crisis and this contrasts with the many speeches made about the need to act urgently.
"The agreement that was signed is proof of that.
"On the other hand, there is a civil society that is much more aware and active and, from street protesters to the (NGO) constituencies, has been demanding much stronger action and worked tirelessly to raise the level of every single sentence of the agreement.
"Sometimes they succeed". (ANSA).