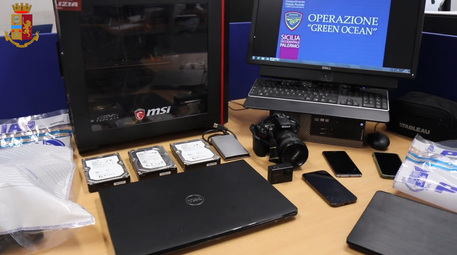 (ANSA) - ROME, SEP 22 - Italian police on Wednesday arrested 13 men across Italy in a child porn probe, judicial sources said.
The massive police operation, using undercover agents, also resulted in the citation of another 21 men.
Those implicated have been charged with the possession, dissemination and sale of child pornographic material.
Police said they had seized over 250,000 computer files.
The persons allegedly involved are of varying age and social extraction, police said, and include young men, older ones, self-employed workers and graduates.
The probe, which took a year and a half to complete, was led by Palermo police.
In October 2019 Palermo prosecutors authorised the use of undercover officers in the case.
One of those arrested is a 29-year-old Sardinian man who was allegedly caught red-handed downloading child pornography from the Web on September 9.
He was found with some 20,000 videos featuring children under the age of 10, police said.
He is being held in Bancali Prison, at Sassari. (ANSA).