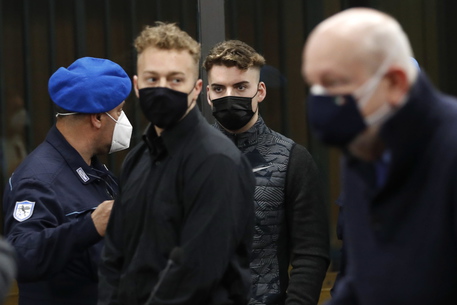 (ANSA) - ROME, MAY 6 - A Rome court on Wednesday gave two young American men, Finnegan Lee Elder and Gabriel Natale Hjorth, life in prison for the homicide of Carabinieri police officer Mario Cerciello Rega in July 2019.
Elder killed Cerciello Rega with 11 stab wounds inflicted by a combat knife he had brought over from the US while Natale Hjorth assaulted the slain officer's partner at the end of a chain of events sparked by a drugs deal that went wrong.
Cerciello Rega , a 35-year-old who had recently returned from his honeymoon when he as killed, was a well-liked and cheerful character.
He was considered a hero for his work on and off duty.
He did volunteer work for the Order of Malta, accompanying sick people to Lourdes and Loreto, and he also regularly went to Rome's Termini train station to feed the needy.
Cerciello Rega's widow, Rosa Maria Esilio, broke down in tears when the sentence was read out.
"It has been a long and painful trial," she told reporters.
"This will not bring Mario back to me.
"It will not bring him back to life.
"It will not give us back our life together.
"Today the first stone of a new justice was laid.
"Mario's integrity was demonstrated even though, as a dead man, he was subjected to many insinuations".
The tragic chain of events started when Elder and Natale Hjorth, who were in Rome on holiday, were conned by a dealer when attempting to buy drugs.
The dealer sold them crushed up medicine instead of narcotics.
The young Americans snatched a bag belonging to a middle man who had put them in touch with a dealer and subsequently contacted him, demanding money and drugs in return for the bag.
The middle man called the Carabinieri, saying the pair were trying to extort money from him.
As a result, Cerciello Rega and his partner went to a rendezvous in the middle of the night that had been arranged for the exchange.
When the policeman, who were unarmed and in lain clothes, confronted the pair, they were attacked.
The defence lawyers said the young men though they were faced with criminals, not police officers. (ANSA).