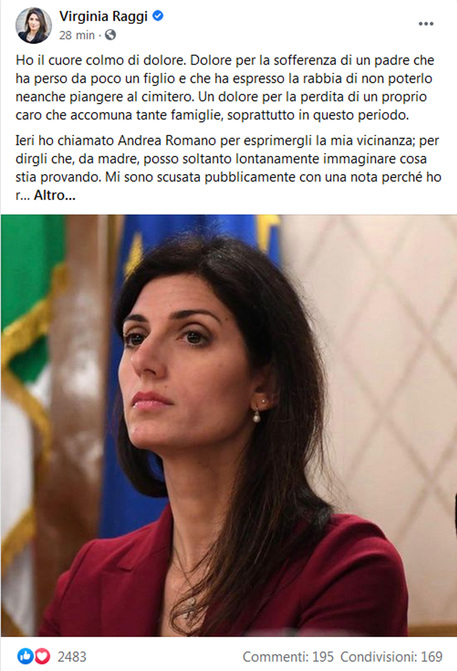 (ANSA) - ROME, APR 23 - The EFI association representing Italian funeral directors has filed a complaint to criminal prosecutors in Rome over the chaos regarding burials in the capital, sources said on Friday.
Thousands of corpses are waiting to be laid to rest or cremated in the city,, the centre-left Democratic Party (PD) has said.
AMA, the agency in charge of burials and which also handles the city's trash, said the backlog has formed because of an increase in deaths linked to the COVID-19 pandemic and new procedures imposed by the health ministry due to the health emergency.
Andrea Romano, an MP for the centre-left Democratic Party (PD), said this week that he has been waiting for two months to be able to give his late son a burial.
An undertaker's firm near the Vatican has put up a sign reading "they won't let us bury your loved ones".
Rome Mayor Virginia Raggi publicly apologised in a Facebook post on Friday and said she had called Romano.
"I have summoned the agency that manages the cemeteries to ask what has happened," said Raggi, a member of the 5-Star Movement (M5S).
"Aside from the reasons of the delays linked to the COVID emergency, I was promised an extraordinary intervention to address the increase in the number of burials". (ANSA).