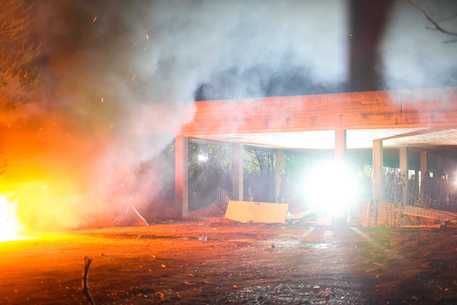 (ANSA) - ROME, APR 13 - There were major clashes between protestors against the Lyon-Turin high-speed rail project and the police at San Didero in Piedmont's Susa Valley overnight.
Police were pelted with stones and flares as work got under way for a new lorry park linked to the A32 Turin-Bardonecchia motorway.
The police responded with tear gas and the clashes lasted a couple of hours.
The protestors had rushed to the scene due to fears a NO-TAV base was set to be demolished, sources said.
A number of police officers, workers and protestors were injured, the sources said.
Protestors in the Susa Valley has staged a long and sometimes violent battle to try to stop the Lyon-Turin high-speed rail due to its impact on the environment. (ANSA).