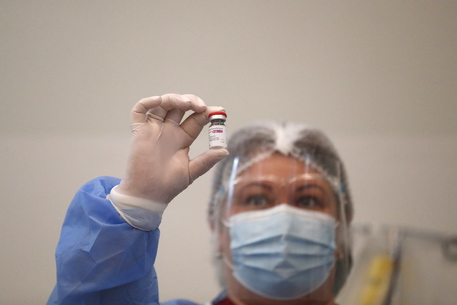 (ANSA) - ROME, MAR 15 - Italian drugs agency AIFA suspended the use of the jab across the country on Monday as a precautionary measure pending a ruling from the European Medicines Agency, in line with several other countries.
Meanwhile, Carabinieri NAS health police started seizing doses of AstraZeneca COVID-19 vaccine from a batch that officials in the northern region of Piedmont suspended the use of on Sunday.
Piedmont banned the use of that batch as a precautionary measure following the death of a clarinet teacher after he had the vaccine.
Prosecutors in Biella have opened a manslaughter probe in the death of the teacher, Sandro Tognatti, and seized batches of jab shots nationwide.
Several countries have suspended use of the AstraZeneca vaccine or of specific batches of it in relation to fears about blood clots and other possible side effects.
Last week Italian medicines agency AIFA suspended another batch following reports of a sailor and a policeman dying in Sicily after taking the vaccine.
They were followed by another officer in Sicily and a school janitor and teacher in Campania, making six such deaths in all in Italy.
AIFA stressed that the suspension was a precautionary measure and that a causal link between the "severe adverse events" and the vaccinations had not been established.
Health Minister Roberto Sperenza has said the COVID-19 vaccines being used in Italy are safe and the World Health Organization has defended the AstraZeneca jab.
Germany, Thailand, Norway, Iceland, Bulgaria, Luxembourg, Estonia, Lithuania, and Latvia have stopped giving the jab, developed with Oxford University, over blood-clot concerns, while Austria has joined Italy in stopping certain batches.
(ANSA).