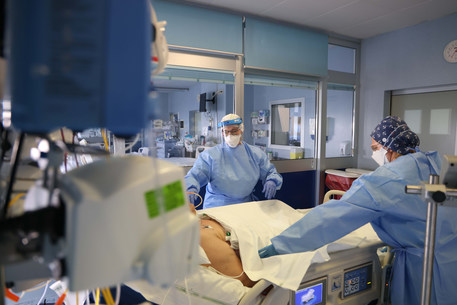 (ANSA) - ROME, FEB 26 - The general COVID-19 risk situation has deteriorated in Italy for the fourth consecutive week and new measures are need to combat contagion, according to a draft of the weekly coronavirus monitoring report of the health ministry and the Higher Health Institute (ISS).
It said the number of regions/autonomous provinces where the contagion risk level is high has gone up from one to five.
They are Abruzzo, Lombardy, Marche, Piedmont and Umbria.
The number of regions/autonomous provinces considered to be of low or moderate risk has decreased, from eight to six and from 12 to 10 respectively, the report said. It said the upswing in the spread of the coronavirus was linked to the arrival of more contagious variants.
"Further mitigation measures are urgently needed across the national territory and timely mitigation-containment measures are needed in the areas of greatest spread to prevent health services being overwhelmed," it said. It said restrictions should be imposed to achieve a "drastic reduction in physical interaction between people".
"It is fundamentally important that the populations avoid all occasions of contact with people from outside the group they live with that are not strictly necessary and stay at home as mush as possible," it said.
The report said the number of regions where the proportion of COVID patients in intensive care was above the critical threshold had increased from five to eight.
It said the average age of people who are positive for COVID-19 has fallen to 44.
The nationwide incidence of cases per 100,000 inhabitants increased to 145.16 in the week of February 15-21, up from 135.46 in the February 8-14 period.
It said the incidence was over 250 cases per 100,000 inhabitants in the autonomous provinces of Trento and Bolzano.
It said that "multiple" alarm signals has been registered in Lombardy and Piedmont. (ANSA).