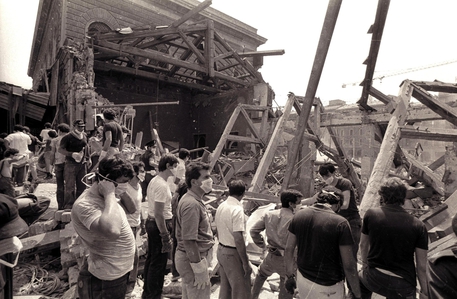 (ANSA) - ROME, FEB 15 - A judge on Monday indicted Paolo Bellini, a former member of rightist militant group Avanguardia Nazionale, in relation to the Bologna train station bombing that killed 85 people on August 2, 1980.
Bellini is accused of being one of the people involved in planting the bomb along with several members of the NAR right.wing terrorist group who had been previously convicted.
The late P2 subversive rightist Masonic lodge head Licio Gelli and accomplices Umberto Ortolani, Federico Umberto D'Amato and Mario Tedeschi allegedly financed and organized the massacre.
A former Carabiniere police officer and another man were also sent to trial for allegedly throwing the investigation off track.
Last year a judge cancelled Bellini's 1992 acquittal in relation to the case after it emerged that a face on a frame from an amateur Super 8 film shot by a German tourist on the morning of the attack showed a "marked resemblance" to Bellini. (ANSA).