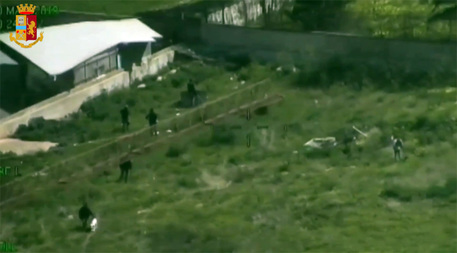 (ANSA) - BARI, FEB 3 - Italian police on Wednesday arrested three people in Bari for the November 2018 murder of the nephew of a former boss in the Puglian mafia Sacra Corona Unita (United Holy Crown, SCU).
Domenico Capriati, 47-year-old nephew of Tonino Capriati, was allegedly murdered because he was getting too big for his boots, police said.
Rival mobster Michele Larizzi, 38, was arrested on suspicion of ordering the hit.
Domenico Monti, the 62-year-old former right hand man of the clan boss, and his son-in-law Christian De Tullio, 30, were arrested for allegedly carrying out the assassination on November 21 2018.
Police said the pair sprayed Capriati with a hail of bullets after he came out of his house with his wife and daughter, who were unhurt in the hit, before finishing him off with a pistol shot to the head. (ANSA).