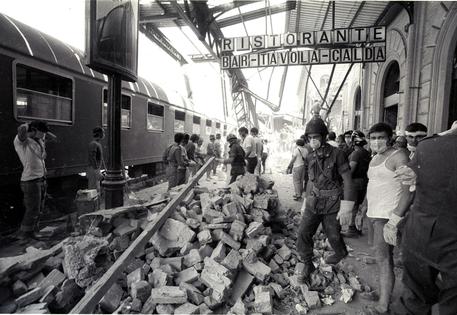 (ANSA) - BOLOGNA, JAN 8 - The August 2 1980 bombing of Bologna train station that killed 85 people was a "State massacre," Bologna judges said Friday in explaining their life term for a fourth member of the neofascist militant NAR group, Gilberto Cavallini.
"It was a political massacre, or more accurately a State massacre," said the Assize Court judges in their written explanation.
They said that the view that the massacre had been carried out by a gang of four acting alone was incorrect.
The Bologna massacre (Italian: strage di Bologna) was a terrorist bombing of the Bologna Centrale railway station in Bologna, Italy, on the morning of 2 August 1980, which killed 85 people and wounded over 200.
It was Italy's deadliest terrorist attack of the 25-year 'Years of Lead' of rightist and leftist militant violence.
Several members of the neo-fascist terrorist organization Nuclei Armati Rivoluzionari (NAR, Armed Revolutionary Nuclei) were sentenced for the bombing, although the group denied involvement.
Investigations have uncovered alleged links to Italy's secret services.
NAR founders Francesca Mambro and Valerio Fioravanti were sentenced to life imprisonment for the massacre, and Luigi Ciavardini got 30 years.
Late subversive rightist para-Masonic Propaganda Due (P2) lodge chief Licio Gelli was recently convicted of being among those who commissioned the bombing.
Historians have seen the atrocity as part of a string of rightist subversive bombings in the so-called strategy of tension aimed at keeping the Communists out of national power.
Other rightist militants have been convicted in the case, as well as the NAR members. (ANSA).