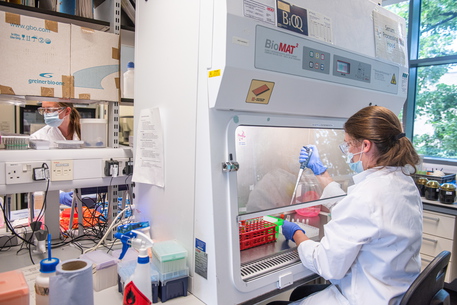 (ANSA) - ROME, 23 NOV - A COVID vaccine being developed by Oxford University for drug multinational Astrazeneca and two Italian firms including biomedical firm IRBM has been shown to be up to 90% effective in phase three clinical trials, researchers said Monday.
Two different types of administration of the vaccine were trialled, the British university said.
The better one, with 90% efficacy and a maximum tolerability for the elderly, envisages the inoculation of half a dose and then a follow-up with a full dose after a month.
The second regime, with two full doses being given at a month's interval, has shown 62% effectiveness, the university said.
Oxford also carried out a combined analysis of the two regimes which showed an average effectiveness of 70%.
Health Minister Roberto Speranza hailed the results of the trials.
"The news out of Oxford on the anti-COVID vaccine is encouraging," he said.
He said "a lot of prudence is still needed, but it will be scientific research that will bring humanity out of this crisis".
Speranza noted that "major Italian firms" are involved in the project, including IRBM, based at Pomezia south of Rome, and Catalent, based at Anagni between Rome and Naples.
It is hoped that the Oxford vaccine may be available some time next year.
Piero Di Lorenzo, the president of the IRBM Pomezia centre, has said that the first doses could be ready even earlier, by the end of December.
AstraZeneca is a British-Swedish multinational pharmaceutical and biopharmaceutical company with its headquarters in Cambridge and its R&D concentrated in three strategic centres: Cambridge, Gothenburg and Gaithersburg.
IRBM Science Park is an Italian firm, founded in 2009 at Pomezia just south of Rome, operating in the sector della molecular biotechnology, biomedical science and organic chemistry.
Catalent is a vial and drug packaging firm.
According to its website, Catalent's Anagni facility is a world-class, late-stage and commercial product launch site offering sterile and biologics manufacturing and secondary packaging with extensive expertise in vial filling for aseptic liquid and powder products. (ANSA).