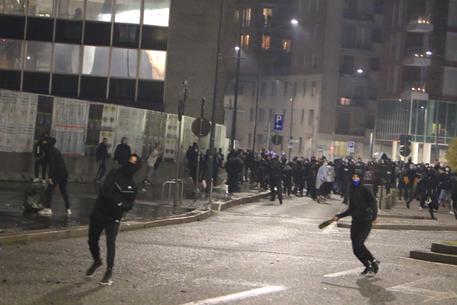 (ANSA) - ROME, OCT 27 - On Tuesday 28 people were reported to prosecutors for criminal damage and violence against public officials after an unauthorised protest in Milan against COVID -19 restrictions turned ugly overnight.
Turin was also badly hit by violent protests although clashes have taken place in several Italian cities over the last few days, with ugly scenes in Naples and Rome too.
Of the 28 people cited in Milan, 13 were minors and some of them had criminal records for minor offences.
Ten of the 28 were foreign nationals while 18 were Italian.
They included a young woman linked to anarchist circles.
Among other things, the government has ruled that bars and restaurants must stop serving at 18:00 while several regions have imposed curfews at night.
Six people, meanwhile, were arrested in relation to violence, fires and looting in central Turin.
A man caught setting light to trash cannisters, along with a 17-year-old girl, was arrested for criminal damage and resisting arrest.
Two Egyptian nationals, one of whom is a minor, were arrested for looting a Gucci shop.
Three Italians were arrested too and two others were reported to prosecutors over the looting of a Louis Vuitton store.
Around a dozen police officers were hurt in the clashes in Turin.
Turin Mayor Chiara Appendino blasted the "criminal actions of violent people who contaminated the peaceful protest of shopkeepers, entrepreneurs and workers.
"It was organized to destroy, not to protest," she said via Facebook.
On Monday, President Sergio Mattarella called on people not to behave irresponsibly, saying the virus was the enemy as it was making the restrictions necessary. (ANSA).