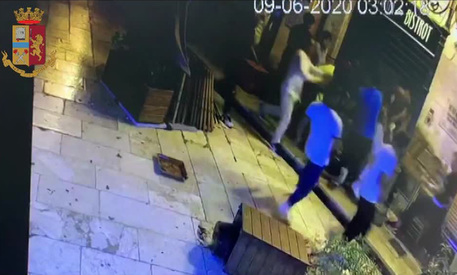 (ANSA) - MARSALA, OCT 1 - A gang of at least three young Italian men allegedly beat up non-EU migrants in the Sicilian city of Marsala purely out of racial hatred, police said after arresting the three on Thursday.
The gang, members of Marsala soccer team's 'ultra' hardcore fans called "the street boys, rebel nucleus", carried out their "raids" at the weekend in the historic centre of Marsala, police said.
The three who were arrested were named as Salvatore Crimi, 18, Antony Licari, 24, and Natale Salvatore Licari, 34.
Police said they and other gang members used blunt objects to beat black migrants, acting "with cruelty and without mercy, out of discrimination or racial and ethnic hatred".
The attacks took place in Marsala over the summer, police said.
They were, police said, "full-blown punitive raids against harmless non-EU citizens who were subjected, without any apparent reason, to verbal and physical violence by the criminal gang".
The alleged racist thugs hit their victims with kicks, punches and knees and used weapons including wooden chairs, tables, glass bottles and various other items of furniture, police said.
The alleged gang was "blinded by bestial, unmotivated rage, made all the more deplorable by phrases hailing race hatred like 'you're sh**y Africans', 'you can't speak because you're coloured', and 'we're going to kill you, you have no right to be here'," police said.
On one occasion the gang also attacked a local shopkeeper who had tried to protect migrants from their wrath, police said.
Their victims were so afraid of the gang's ferocity that they did not report the attacks and often did not even get medical care for their injuries, police said.
The three have already been served DASPO stadium bans for their hooligan acts, police said.
A search of Crimi's home turned up a semi-automatic pistol, and 10 cartridges.
Police are looking for the other members of the gang. (ANSA).