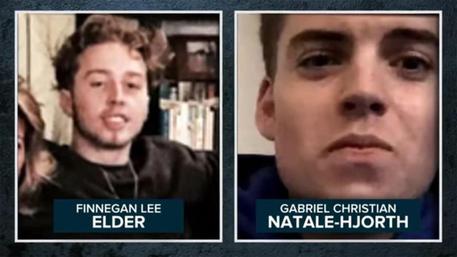 (ANSA) - ROME, JUL 15 - Finnegan Lee Elder, a young American accused of stabbing to death a Carabinieri police officer in Rome last year, is in possession of his mental faculties and, therefore, fit to stand trial, according to a psychiatric report filed by court-appointed experts.
Elder is on trial for the murder of Carabiniere police officer Mario Cerciello on July 26, 2019, along with his friend and fellow American Gabriel Natale Hjorth.
Elder is accused of stabbing Cerciello Rega while Natale Hjorth allegedly assaulted the slain officer's partner at the end of a chain of events sparked by a drugs deal that went wrong.
The report by professors Stefano Ferracuti and Vittorio Fineschi said that Elder is a "person with a borderline-antisocial personality disorder of medium-high seriousness, a history of substance abuse (in particular THC) and a possible post-traumatic disorder due to stress.
"Nevertheless," it continued, "it is not possible to demonstrate that Elder's verified mental condition compromised the subject's free capability to make decisions at the time of the criminal act".
An autopsy on the body of Cerciello Rega said that five stab wounds were inflicted with great violence with a large knife..
Cerciello Rega's partner, Andrea Varriale, rejected the defence's assertion that Elder and Natale Hjorth did not realize the pair were plain-clothes policemen.
"We approached the two of them from the front with our badges out, saying that we were Carabinieri," Varriale said. (ANSA).