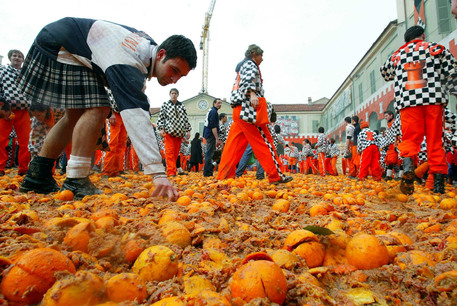 (ANSA) - Ivrea, February 4 - The 'general' of the traditional battle of the oranges in the northern town of Ivrea has been removed after he was placed under investigation for allegedly molesting a woman playing a part in the upcoming pageant who quit because of the alleged abuse.
Alberto Bombonato was reported to the police by the woman, who was playing a 'vivandiera' or canteen-keeper in the three-day event just before Shrove Tuesday that draws thousands of tourists to Ivrea every year.
Bombonato allegedly sent texts of a very explicit sexual nature to the woman. The foundation that runs the festival said it "condemns all forms of violence, always and everywhere".
It said Bombonato had been removed to allow him to defend himself from the woman's charges.
After his removal, the general from last year's edition, Vincenzo Ceratti, was named in Bombonato's place this year too. A Red Cross volunteer and insurance agent, 52-year-old Ceratti was said to have been "particularly appreciated in the role last year".
A local MP for the centre-left Democratic Party (PD), Francesca Bonomo, called Bombonato's alleged conduct "unacceptable".
"Respecting women is fundamental," she said. The Battle of the Oranges (Carnevale di Ivrea) is "one of the craziest and most widely-anticipated festivals in Italy", according to its website.
The medieval tradition, which was established in 1808, is a three-day long festival that takes place just before the equally incredible Mardi Gras and is considered one of the craziest food fight festivals around.
Over 100,000 spectators travel to Ivrea to witness and join in this exciting carnival yearly. The Battle of Ivrea is perhaps the best marriage of both history and good fun; an outdoor event where spectators get a chance to relive one of the most significant turning points in Italy's past. As its name implies, you'll be seeing lots of oranges: you can join one of the organized groups to throw them around! The event mimics the civil war between the Royal Napoleonic Troops and the people of Ivrea following the murder of the tyrant Rainieri di Biandrate.
The organized "battle" tells the story of a people who are rebelling against a tyrannical government. It is composed of squads where the orange throwers, known as the aranceri (who represent the people) defend the piazzas by tossing the citrus fruits (which represent arrows) from the carts (which represent the Napoleonic troops); creating one of the most unusual carnivals in the world. Historical personalities involved in the civil war are also represented, including the Mugnaia (miller's daughter), and her cortege who generously distribute gifts to those who join in.
The Battle of the Oranges is accompanied by vibrant, ostentatious floats as well as talented musical and folkloristic groups that visit from all corners of Italy and Europe.