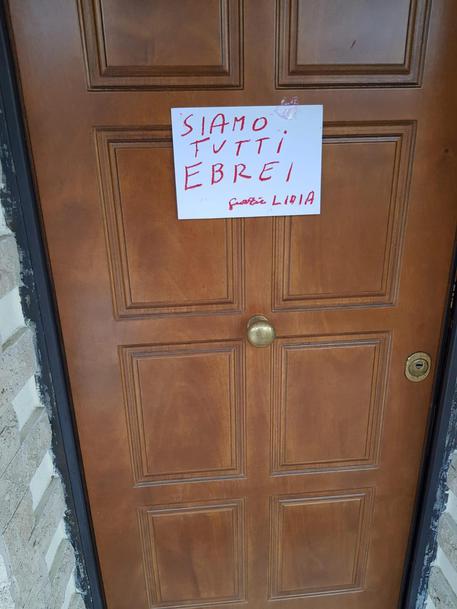 (ANSA) - Turin, January 28 - The words "die dirty Jew" were found scrawled Monday night outside the home of a woman in Turin.
The woman, of Jewish origin, is the daughter of a courier for the partisans in WWII.
The woman, Maria, said "it is a terrible message, especially on Holocaust Memorial Day".
"These are old terms, passe', but ones which still hurt".
She has filed a complaint to the local police.
DIGOS security police are investigating.
The woman, Maria Bigliani, said Tuesday: "For now I'm not going to rub out the message. I want to leave i as evidence of a racist gesture, which should not happen again.
"In my life I have been subjected to stupid and racist remarks, but I've always answered back. My mother would have told me to report it to the police, so I did".
The local chapter of partisan association ANPI will hold a meeting at the women's apartment block in a sign of solidarity on Tuesday.
There have been several episodes of anti-semitic and race hate in Italy recently.
Anti-Semitic graffiti was found on Friday morning on a door of the son of a well-known Holocaust survivor in the northwestern town of Mondovì near Cuneo, not far from Turin.
"Juden hier" (Jews are here), which was written in German cities during Nazism, appeared overnight on the door of Aldo Rolfi, son of Lidia, an Italian partisan fighter who was deported to the Ravensbruck concentration camp in 1944 and became a powerful voice denouncing the horror endured by Jews there after the war.
The woman lived in the Mondovì home until her death in 1996.
The road where the house is located has been named after her.
An apparent increase in cases of anti-Semitism and hate has caused concern from many quarters.
On Monday, Holocaust remembrance day, President Sergio Mattarella said the memory of the Holocaust should be a "constant warning" and accounts of Fascist crimes should not be watered down.
Milan Mayor Beppe Sala put up on his door the words "Antifa hier" (Antifascists live here) in solidarity with the Mondovì case. On Sunday night, also, a bar run by an Italo-Moroccan woman near Brescia was broken into by intruders who scrawled an inverted swastika and "ni**er whore" on the floor.
The incident happened at Rezzato.
The woman found a broken window and the graffiti.
Police are investigating.
"I don't know if I'll reopen the bar," the owner, Madiha Khtibari, told ANSA.
"Now I'm frightened and upset. I'm struck by the fact that none of the nearby flats heard the noise and reported it.
For now, the bar is temporarily closed.
"I often got insistent comments from clients and also verbal threats. That's why I always preferred to be accompanied when I was opening or closing the bar".
A swastika and anti-semitic messages also appeared on the walls of a Rome school Tuesday and were immediately cancelled, Mayor Virgina Raggi said.
"This is a disgraceful act, and the capital does not forget what happened during the Shoah," she said, referring to the deportation of Rome's Jews to Nazi death camps.
Culture can provide an answer to hate and intolerance, President Sergio Mattarella said at the inauguration of the academic year at the University of Sannio on Tuesday.
"In reference to the pseudo-culture of hatred and intolerance the answer is here, in this university and other universities," he said.
"At a time when the world is full of uncertainties that often renew themselves and are now alarming, the response to these distortions lies in culture and the messages that our universities are able to give".