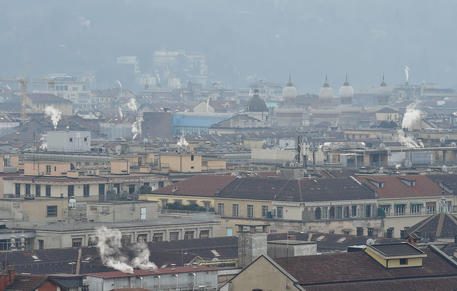 (ANSA) - Rome, January 23 - The fine particles that cause smog broke safe limits in five Italian cities for 18 days in January, environmental group Legambiente said Thursday.
The cities were Milan, Turin, Padua and Treviso in northern Italy, and Frosinone between Rome and Naples, it said in its 'Mal'aria' (Bad Air) report.
The levels were exceeded for 16 days in Naples and 15 in Rome, the report added.
Last year, the association said, some 26 urban centres exceeded the safe levels for PM10 fine particles and for ozone too.
Turin was top with 147 days over the limit (86 for PM10 and 61 for ozone), followed by Lodi and Pavia, all in the north.
Looking back over the last 10 years, Legambiente said 28% of monitored cities exceeded daily safe PM10 limits every year.
Turin was top in seven out of 10 cases, with a total of 1,086 days of city air pollution.
Frosinone was the only other city to exceed 1,000 days.
A smog emergency abated in northern Italy early this week, sources said Monday.
The level of dangerous PM10 fine particles dropped below alert levels in Milan, Turin, Cremona, Pavia and Mantua.
Anti-smog car bans have ended in these and other northern cities.
In Turin, in particular, the particles have been swept away by rain and wind.
Diesel cars started circulating again there from Tuesday.
Environment Minister Sergio Costa said the government had enough resources for fighting smog.
"The funds are there, and they are structural," he said.
He said that the "whole of the Po basin is continuing to suffer".
In Milan, to fight smog, Mayor Beppe Sala has announced a ban on smoking at bus and tram stops.
He said that in 10 years' time smoking would only be allowed in private residences.
photo: Turin